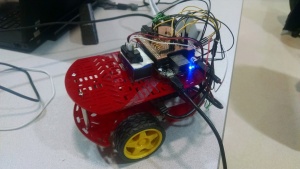 The objective of this project is to create an autonomous Robot based on Beaglebone Black. The robot's structure is consisted basically of two parallel back tractioned wheels, a guideball on the front, 3 Infrared rangefinders and two digital rotation encoders.

The first type of sensor that is able to interact with the BBB is the Magician Robot encoder from Sparkfun which is successfully working and being read by a python script.

The second type of sensor that can be read is the IR distance sensor and they can be a little tricky to deal due to their non-linear nature, but putting them 10 centimeters away from the edge and using an equation to correlate the voltage to a distance works.

In the end we want an autonomous robot that can find and hug walls using the IR sensors, and then use the rotary encoders to detect when the robot is in a stalled state. Along side this we made hardware in the form of a cape to hold all the components needed.

To the right you can see the completed robot hardware. 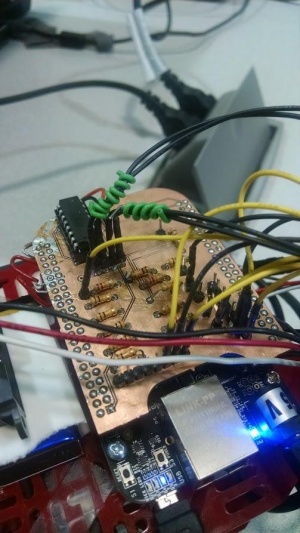 Closeup of the Cape

For the packaging of the solution our team made a cape for the BBB that included all of the voltage dividers needed to properly read the sensors alongside the H-Bridge to drive the motors. The point of this cape is so that the user just has to plug all the inputs and outputs on the cape and the robot should be ready to go.

For power we have two parts. The 9 Volt battery to power the motors and the 5 V barrel connector to power the BBB and logic. For the 9V battery you just have to buy one and attach it to the 9V header. The barrel connector was slightly more complicated. We used a USB battery pack, but we needed a barrel 5 V input. So what we did was take a mini USB cable and spliced it. The connected the power and ground to a two wire to barrel connector. This allowed the robot to be portable and run on its own.

Our initial testing of our circuit came through building it on a breadboard. Here is a schematic of our setup. 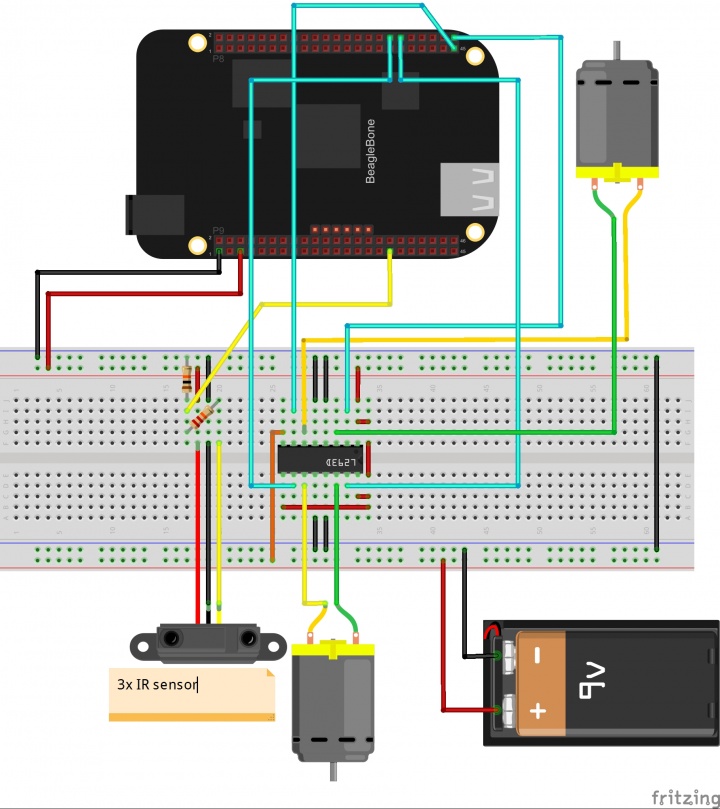 This project was developed in python which has a simple API created by Adafruit called Beaglebone Black IO - BBIO.

To install Adafruit's BBIO follow the instructions below. These installation instructions are for Debian and Ubuntu distributions:

1 - Update your Operating System and install the dependencies:

3 - Verify if the BBIO was installed properly:

If the previous installation method fails, install it manually:

1 - Update and install the depencencies:

2 - Clone the BBIO's git repository and change into the directory it was downloaded into:

3 - Install the API and remove the installation file:

The specifics on how to use this API in Python can be found on the following link provided by Adafruit.

The python scripts used on the project can be found in this git repository.

Do not forget to power the Bone with a battery pack similar to the LifeCHARGE JUICYPACK.

This file contains our basic AI. This program finds a wall and then hugs it. If it unhuggs a wall if it gets to far, the robot finds another wall.

How to Run on the Robot

We used a portable USB pack and constructed a cable to attach it to the barrel connector. This allows you to program the robot, unplug the USB, and the watch it run on the floor/test area.

The software basically is divided in three different distinct states. The first state is accessed when the robot has not detected any walls yet or when it moves too far from a wall. In this state, the robot moves forward until a wall is detected by the front sensor. When a wall is detected, the robot decides based on which sensor is reading the largest distance to the next obstacle, to turn 90 degrees towards that direction. When a direction is taken, it changes to one of the two sequential states: clings to the wall on the right or the left. These two follow essentially the same logic but for different directions. When the robot is between the lower limit or the higher limit of the distance from the robot to the wall, moves forward. If the robot gets too close to the wall, a distance that is smaller than the lower limit, the robot turns slightly to the opposite distance. If the robot gets too far from the wall, a distance that is bigger than the higher limit, the robot turns slightly towards the wall. If the robot moves away from the wall but in a distance that is much further than the distance defined by the higher limit, the logic changes the state back to the initial state.

For the Infrared distance sensors, due to its not linear nature, the equation distance = 41.543(volt + 0.30221)^-1.5281 in which works for distances between 10cm and 80cm. In this case, it is advisable to put the sensors 10cm away from the edge of the robot, but nothing stops the user to define scales accordingly, not letting the robot reaching distances < 10cm.

There are alot of things you could do with this project in terms of your own programs using the motorControl, and IRread functions.

In terms of this project you could add more calibration to the motors because one is noticably slower. We didnt take into account this differance when implimenting our algorithm.

The IR sensor values are noisy, one could find a way to get a smoother stream of inputs.

The rotary encoders could be used more to make more accurate turning and control.

This project, although it seems simple, required a lot of debugging skills from either software and hardware. A good amount of hours were spent to detect an internal short in the H-bridge that caused two Beaglebone Blacks to be burned. Putting these problems aside, this project is a great opportunity to explore Adafruit's BBIO python APIs, specially the PWM applications and getting to know more about how the IR sensors used in the project work. The project could be upgraded to use an encoder in order that detects each of the wheels' speeds, balancing the PWM cycles making its motion more stable. The same encoders could be used to detect when the robot gets stuck on something, creating a timeout to attempt to solve the problem. A line sensor would also be beneficial in case the robot is put in a labyrinth to find its way out using the line as a center reference.