This page is to document the creation of a Juicebox cartridge that contains a custom bootloader, uclinux kernel, and ramdisk which can be used with any unmodified juicebox.

after doing some initial tests with a smartmedia card, i had enough info to build a usable cartridge.

this modification is based on the SD/MMC Cartridge, aka MP3-kit], however it also can be done with standalone components.

first step is the open the JuiceBox MMC cartridge are remove the pcb. after removable you will need to cut three traces(in red) and solder across two resistors(in blue). 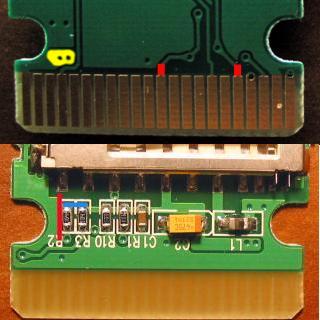 these reconnections can be done by either soldering to the cut trace on the back side or using a small wire to go around to the front. soldering a wire to the front is easier and there is enough room along the sides of the case for the wires.

since pin 1 on the pcb is so close the plastic enclosure, you'll need to make the connection further out on the pcb, so you will need to scrap clean some copper at the via hole just above pin 1 as noted in yellow on the photo. the ground on the other side , pins 19 and 21 have the same problem, so a copper area at the top of the pcb needs to be cleaned as well( see photo below).

you will need an xD card for the next step.

you will need to trim the edges of the card slightly so that it will fit inside the case. the plastic on each side is strictly for the socket guides and can be removed with a box cutter or xacto knife. you will need to mix up some epoxy to glue the xD card to the back side of the pcb. the picture has red markers for alignment. the pcb has small holes(via's), so when you glue the xD to the back let the epoxy dry a little before application and turn the pcb on its back during drying so that the epoxy does not go through the holes. failure to be careful with the epoxy will cause the epoxy to go through to the sd/mmc socket and make it unusable(doh and yes I'm speaking from experience). another option is to desolder the sd/mmc socket before doing the epoxy but thats only if you have the time and equipment handy. 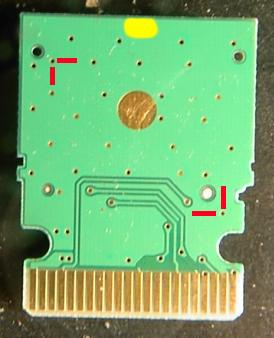 the contacts on the xD card are very close together and can be difficult to solder to due to solder bridges. before beginning to solder to the xD, use a box cutter or xacto knife to scrap in between the contacts to widen the space.you will need to tin the card edge contacts as well as the copper area that you cleaned earlier for pin 1 and for the ground area at the top of the pcb. the Vcc line ( pin 1 on the xD and pin 1 the card edge) needs to be soldered first as there is little room afterwards(doh doh). i used wire from an 80 conductor IDE cable, but tested with 40 conductor IDE cable and found that the wire was too big. 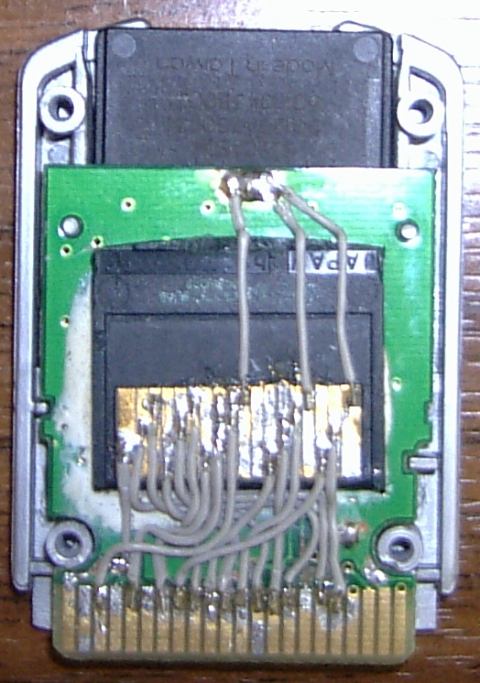 to program the cartridge you will need a JuiceBox wired for the JTAG Interface] and Serial Console]. you copy the bootloader, kernel and ramdisk to the sd/mmc card. load the program_flash application into ram on the juicebox and execute it. this will copy the bootloader, kernel and ramdisk from the sd/mmc card and copy it to the flash. when finished, the cartridge is ready to use on any unmodified Juicebox.

the program_flash application is currently being cleaned up for posting and will be GPL licensed. its based on the work of Joe Bleau with his JuiceBox Code Test.

1- Is the JuiceBox basically an SD/MMC + smartmedia/xD combined interface?

2- Does the ROM bootloader in the JuiceBox first check to see if there is a XD/smartmedia cart inserted, and if so, tries to boot from it?

technically it checks to see if a juiceware cartridge is present by checking a gpio line. the ROM bootloader doesn't really know anything about xD/Smartmedia its basically looking for nand flash. if the contents of the nand flash meet certain requirements its copies the contents to ram and jumps to that location to begin executing the program.

3- Why is the JuiceBox itself necessary to prepare the boot XD? Whatever it writes to the XD sure can be done from a PC with a standard xD/Smartmedia card reader.

unlike SD,MMC and CF cards, smartmedia and xD do not contain controller chips to perform wear leveling, bad block management and error detection(ECC), therefor as part of the Smartmedia and xD specifications the device that it is connected to must do these. almost all USB->SM/xD card readers have implemented these in the internal chips. what this does is prevent you from having raw access to the nand flash, including block 0 which is where the initial bootcode is stored. there are several methods you could use to program the SM/xD card:

4 - I have inserted the modified cartridge into the JuiceBox and started it up in test mode. With a 32MB SD card in the socket and a 256MB xD card, the memory test shows no SD card and 4 cartridges of 256MB each. Is that what I should expect with the modification, or have I miswired something?