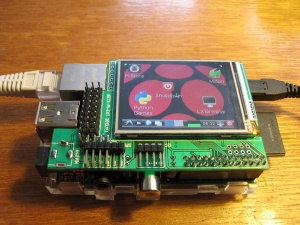 Raspberry Pi with the MZTX-PI-EXT touchscreen.

The MZTX-PI-EXT board (also known as Tontec) is an add-on board with a 2.4 inch 240x320 tft color touchscreen with extention hooks.

A user process (mztx06a) watches changes in the frame buffer and sends them through the SPI bus to the screen. The refresh rate is not intended to display video but is correct for classical GUI. The source code is available on Github[2] with some forks[3] and in various archive files[4]. The version described in the blog works; it seems that the original Github is different and does not work[5]. The original version spent a lot of time in the while(1) loop of loadFrameBuffer_diff_320(); theimmc proposed the introduction of µsleeps in the loop[6]. Other optimisations are possible.

Two/three changes are needed to the original tsc_raspi.c :

To enable the driver,

To test the touchscreen, commands like evtest (tests the Linux input driver mechanism) and xev (test the touchscreen in the 'X' environment) are usefull. xinput-calibrator could be used to calibrate the touchscreen but the result does not seem correct when used with an TransformationMatrix option in /etc/X11/xorg.conf.d/99-calibration.conf.
Mine looks like

The 'handmade' quick and dirty 'calibration' is not perfect but usable in the center of the screen (xinput-calibrator makes things worse; I'll have to make it by hand, checking left/righ top/bottom and deduce some linear combination. The 'TransformationMattrix' is for the original mztx06 code (like a 'TV set' with the connectors below and on the left). 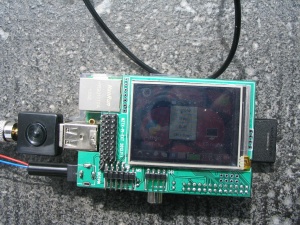 The simplest way (on Raspbian) to get some interaction is to launch a tcl/tk script at startup by adding a line to /etc/xdg/lxsession/LXDE/autostart . Something like :

with menu.tcl being a simple applet with a couple of buttons to launch some simple shell scripts :

The board uses the J1 'GPIO' connector but offers header pins for extensions[14] :