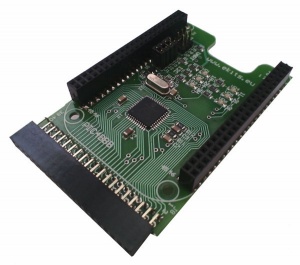 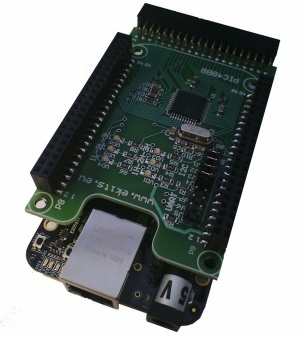 This is cape, which embeds the Microchip controller dsPIC into Beaglebone Black and suggests free software for embedding of Microchip dsPIC33EP / PIC24EP in BeagleBone Black. The complex and very bad documented real time units (PRUs) in BBB are used only to program extra "cape" with fast, low power, rich of peripherals and very low cost microcontrollers (real time units) of Microchip. The reprogramming can be executed at any time from the main (Linux, Python) application, only binary code file is used. So the project can be secure, with "on-fly" easy updating via network, external memory, etc. To use this advanced hardware, the user do not must be embedded Linux expert, no to dig in thousands pages documentation and experimenting which BBB hardware how is used and how can be accessed from the user code (usually it is not possible to access timers, encoder and so on, without complex kernel programming...). So the suggested project make such a simple task as frequency measuring very easy with several rows simple code, in contrary of using long PRU assembler in very not efficient way (software counter). Some advanced features of the real time unit in the suggested PIC4BBB cape are:

- complex up to 6 channel PWM with resolution of about 7ns, proper for advances motor control and power inverters

- fast (above 1Msps) ADC, 10bit or 12bit, with special control, synchronized with advanced PWM or other peripheral

All these advanced and specialized peripherals are independent form the BBB, but can be controlled from this main computer.

- The Microchip's controllers are one of the cheapest.

- This controllers are very well documented and because of popularity – with good support.

- These PIC types has no internal EEPROM, but BBB has enormous fast memory.

- PIC are one of the most secure chips, also fo industrial purposes, so are the BBB. This combination, I believe, is very competitive to specialized industrial controllers, which has of order of many times higher price and usually do not support contemporary aesthetical user interface and user friendly interface, such as BBB Linux with Touch screen.

The BBB works with updated: bone-debian-7.11-lxde-4gb-armhf-2016-06-15-4gb.img This version works fine with LCD touchscreen, starts fastly and easily can be installed with all extra libraries in the integrated 4GB. The Python 2.7 is used with preinstalled Adafruit libraries and it is added only the free project PyPRUSS (https://bitbucket.org/intelligentagent/pypruss), which do not work with Python3. This decision is maximal easy to use - no special requirements to the user software, no linker scripts and so on. Every program, for that PIC can be installed and run with BBB. The PIC controller do not use Operating System, so it starts almost at the moment when is power supplied. So this project can support high security systems, fastly run, until the PIC part supervise the BBB and vica versa.

ATTENTION!: There are no hardware protections if the user set unproperly connected pins between PIC and BBB. Connecting of two pins, switched to Outputs can destroy the BBB or/and PIC.

- Layouts. This is the layout:

The last "Exports all pins not used by HDMIN and eMMC (including audio)". But in

are removed these, used by the cape: 4DCAPE-43T (LCD with touchscreen).

So now it us easy to use: config-pin tool for pin configuration.

IMPORTANT! To be possible to install this layout, the HDMI must be disabled in uEnv.txt, because the pin P9_25 is used by this cape.

which generates name.pbin to use in BBB.

All Config registers must be programmed. Programmer locks the memory at the end. The resulting *.pbin file is about 10 times smaller than the *.hex. So it is very proper for on fly programming via Internet and other also because better security.

From the compiled program, the files Release\data.bin and text.bin are used in the main application (see below).

- pic4bbb... - project for Microchip MPLAB X with XC16, the *.hex file is in \dist\default\production

It has preinstalled Adafruit's libraries for Python2.

The packet must be unpacked in any folder, then:

To work, must in /boot/uEnv.txt:

(may work only with disabling HDMI Audio, some rows down in the file).

4.Now is time for the PIC4BBB - for example pic4bbb_i2c_withExample (the pic4bbb_uart_withExample can be used in the same way):

- in some folder (in BBB or any PC, the script works with any Python version on Linux and on Windows), put the files:

the last is in XC16 project folder:

If all is ok, in the folder is generated file:

This is used in the BBB for on-fly reprogramming of the PIC4BBB cape:

- copy in some BBB folder the files:

pic4bbb_i2c.production.pbin (this is example, generated on previous step)

stdicsp_i2c.py (this is the Python programming script)

This is the BBB real time programmer for PIC.

At least - the python example code:

Reprogram the PIC4BBB with example code:

This controls LEDs on PIC4BBB cape and prints the communication reply. So - the suggested PIC4BBB cape is simple, user friendly and proper for fast and reliable machine control systems design.

Lets we know for any your additional requirements, we are ready to suggest to you special control system project, based on this beautiful and compact design. 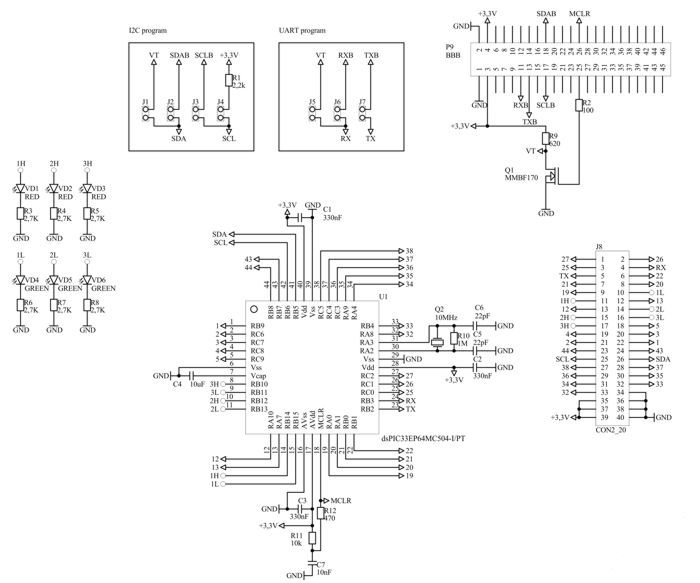