The Pepper Pad 2 was an ARM Linux-based Internet tablet computer which was released in 2005. By 2007, it had been replaced by the Pepper Pad 3, and the entire platform replaced with a new design with an AMD Geode LX x86 CPU.

The original Pepper Pad only existed as a prototype and was never sold to the public. In contrast to the Pad 2, the original Pad had a portrait-mode screen. Few photos of the prototypes exist.

The Pad 2 hardware uses many of the same chips as the Intel "Mainstone" and "Mainstone II" XScale development boards.

The underlying Linux distribution was based mostly on MontaVista Linux CEE and Pro version 3.1.1. The original kernel version used was 2.4.20. This was later updated to a kernel based on 2.6.13.4. Pepper released patches to GPL-licenced code which they modified, and distributed their custom RPMs and software updates using a service named "pup". 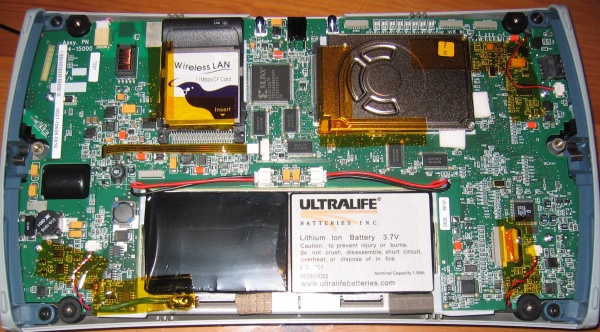 Pad 2 with the back cover removed.

All programs on the Pad 2 run as the root user. Once the Pad has started, pressing Ctrl-Shift-1 would launch an xterm window with a root shell.

The keypad does not require the user to hold down modifier keys, merely to press them in sequence. Typing a second-level key character is accomplished by pressing and releasing the Blue button, and then pressing the desired key.

Along with the Linux OS and Pepper Keeper, the Pad 2 also had all of the MontaVista Linux Pro 3.1.1 RPMs on-disk.

The Pad 2 motherboard has many developer and debugging friendly features. Whether these ports were required as part of the manufacturing process is unclear. They include:

A number of kernel patches are needed to build a Linux kernel that functions on the Pad 2.

Besides patches for the platform's specific quirks, Pepper wrote a number of new Linux kernel drivers for the specific hardware in the Pad 2: