This is a step by step manual on how to assemble an RPi A 2.0 with the DINpi housing.

You need a philips type screwdriver, a soldering iron and some solder to assemble the kit.

The heart of the DINpi is a solder-in carrier board for the RPi 2.0 credit card sized computers. 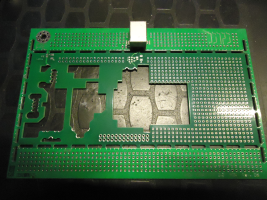 The DINpi carrier board is an electrically connecting adapter and it also supports the RPi mechanically. 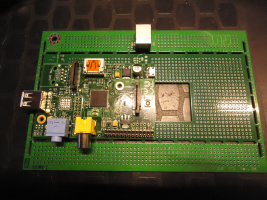 It is realised as a prototyping board and allows for custom peripherals to be added directly adjacent to the RPi.

After mounting the RPi onto the carrier board this now unified hybrid board is then slid into the DIN rail mounting frame. 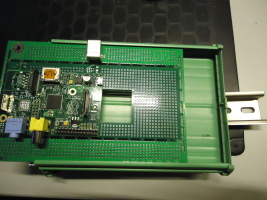 There is also a modular shielding kit which can be used to effectively protect the RPi in harsh electromagnetic environments, as they often exist in industrial electrical installations. 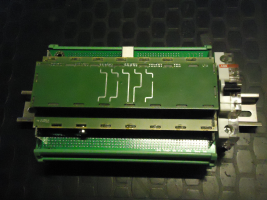 The shielding kit follows the standard DIN rail module profile. The MCB on the right is provided as a reference to this form factor only and is not needed for the DINpi to work.

1. Mounting an RPi A into the DINpi carrier board with an USB B power socket

The USB B socket needs to be soldered into the board with a slight angle so the DIN rail mounting frame does not to obstruct the USB plug. 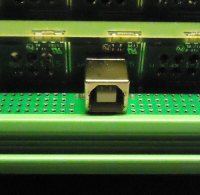 1.1 Put the USB B socket with the pins upwards onto your workbench 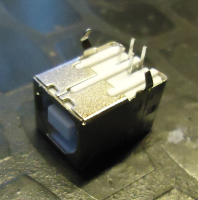 1.2 Plug the board into the socket (sounds wrong, I know) 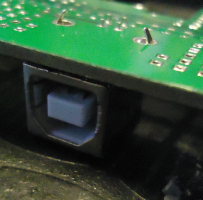 Make sure the USB B socket remains flat on the desktop and the DINpi board rests on the far edge.

This ensures the correct angle for the USB B socket.

1.3 Now, it's time to solder the socket pins into the board. Don't forget the housing latches as they carry the mechanical stress during plugging in and out.

1.4 Next step is to bridge the pi power filter circuit with a drop of solder. It is located between the USB B socket and the RPi. In case you got very harsh (or sensitive) EMC environment you can add a Pi filter circuit here. 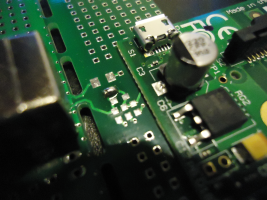 1.5 This step requires some experience and you may damage your RPi if you are not careful. If in doubt, carry on with the next step and return here after all the other solder points are sorted.

After inserting the RPi board into the DINpi carrier board you need to locate the bottom side of the RPi where the Micro USB power socket is mounted (on the top side) right next to the SD card socket. If you see LEDs you got the wrong corner, its the one opposite to the LEDs. 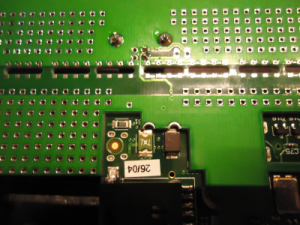 There you see a green fuse device and a black diode, and two tinned half-circles integrated into the DINpi board. These two are the two power supply "pins" of the DINpi board and you need to solder them now. Don't fuzz about with a lukewarm soldering iron now or you end up unsoldering the fuse or diode accidentally. I set my iron to full steam and start heating up the half-circles and after a few seconds I add solder until this drop of solder becomes bigger and bigger and reaches the part. One or two seconds later I get a smooth surface of the drop. This is the time to remove the iron without causing any mechanical movement to any of the boards until the solder has gone solid again (takes a few seconds, especially for the ground terminal). All this I do while I push the RPi and the DINpi boards together with the fingers of my other hand.

Ahh, well. Looks like I need to exercise a bit more myself! I'm sure you can do a better job than what you see in the photo.

1.6 I recommend at least two other solder points to improve the mechanical stability of the whole setup, again with respect to plugging in and out and the mechanical stresses involved during such events.

From here on its plug an play again: Insert an SD card, connect a serial adapter to the GPIO pins (if you want) and plug in USB power. 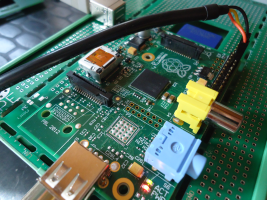 You can unsubscribe here.

Privacy notice: Your email is only used for the purpose of sending you updates. Our newsletter is not handled by some cloud behind a cloud but by the non-free Rapidmail newsletter service (yes, this means I pay with my own money for your privacy). The Rapidmail company is located in Germany and thereby subject to very strict German privacy laws, the strictest in the world I may add (not a surprise really is it).