Introduction to Project: The goal of this project is to create a Wireless Controlled Car using DC motors interfaced with beaglebone/pi/... The Control signals will be sent over WiFi. Capacitive touch screen is used to get the Input Signal. The motivation is to build an unmanned vehicle which has a long range of operation.

Working parts: All the electronic components such as DC motor, Raspberry Pi, Motor drivers, Arduino, various Sensors have been installed on the car and are functioning properly. Software component of our project like interfacing the touch screen to Pi and Pi to WiFi Server also perform with almost zero latency.

Not Working Parts: I take pride in claiming that till now everything that we proposed to deliver has been implemented successfully.

2. Install the Tkinter package on one raspberry pi (which is connected to touch screen say it 'A').

3. Write the program to make buttons on touch screen and interacting client code.

4. Write code for server side interaction on second Pi.

6. Software to write codes on Arduino is also to be installed. If you have a voltage converter, you can avoid the usage of Arduino.

Photos of Car in the Making are here: Photos_of_Car_in_the_making [Source]

These are some photographs of the essential electronic components used: 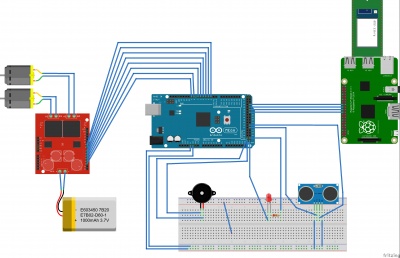 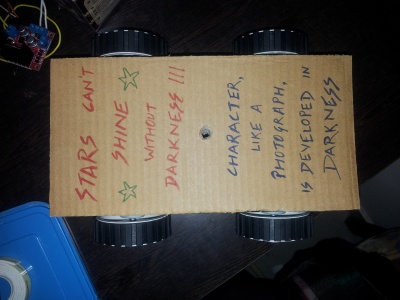 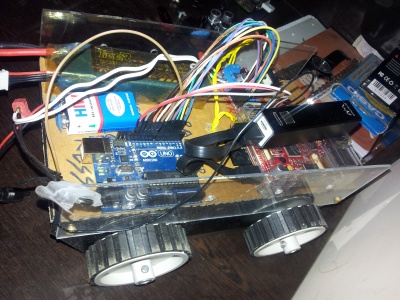 Loaded with Arduino and Raspberry Pi and Driver 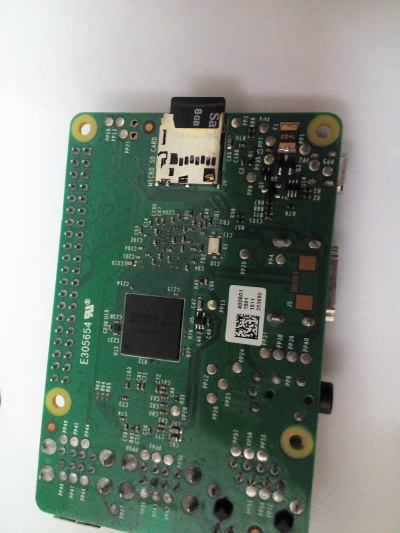 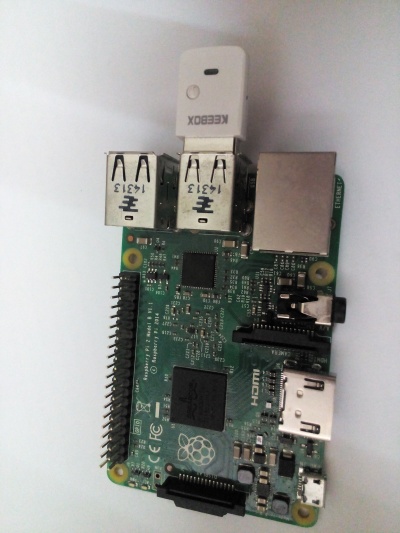 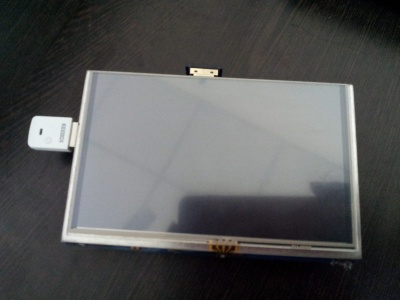 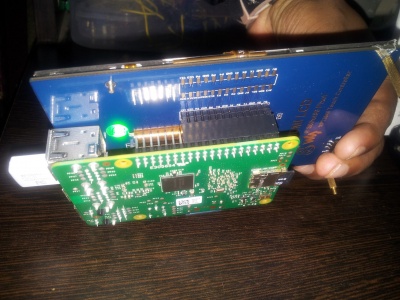 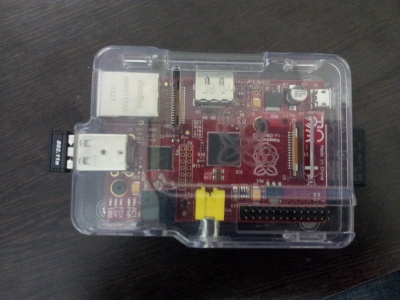 Another Pi connected with WiFi Module and SD CARD 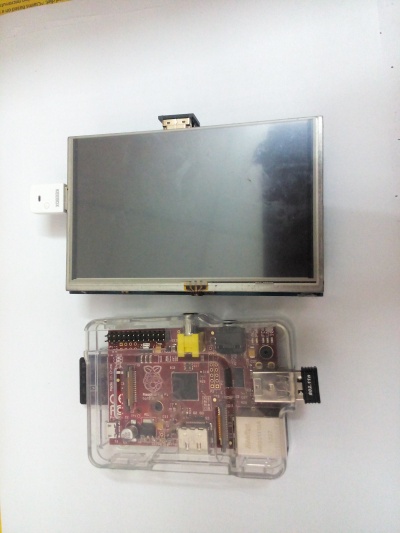 After downloading the .zip file, unzip it to get the image file (.img) for writing to your SD card.

1. Please note that the use of the dd tool can overwrite any partition of your machine. If you specify the wrong device in the instructions below you could delete your primary Linux partition. Please be careful.

2. Run df -h to see what devices are currently mounted.

4. Run df -h again. The new device that has appeared is your SD card. The left column gives the device name of your SD card; it will be listed as something like /dev/mmcblk0p1 or /dev/sdd1. The last part (p1 or 1 respectively) is the partition number but you want to write to the whole SD card, not just one partition. Therefore you need to remove that part from the name (getting, for example, /dev/mmcblk0 or /dev/sdd) as the device for the whole SD card. Note that the SD card can show up more than once in the output of df; it will do this if you have previously written a Raspberry Pi image to this SD card, because the Raspberry Pi SD images have more than one partition.

5. Now that you've noted what the device name is, you need to unmount it so that files can't be read or written to the SD card while you are copying over the SD image.

6. Run umount /dev/sdd1, replacing sdd1 with whatever your SD card's device name is (including the partition number).

7. If your SD card shows up more than once in the output of df due to having multiple partitions on the SD card, you should unmount all of these partitions.

8. In the terminal, write the image to the card with the command below, making sure you replace the input file if= argument with the path to your .img file, and the /dev/sdd in the output file of= argument with the right device name. This is very important, as you will lose all data on the hard drive if you provide the wrong device name. Make sure the device name is the name of the whole SD card as described above, not just a partition of it; for example sdd, not sdds1 or sddp1; or mmcblk0, not mmcblk0p1.

9. dd bs=4M if=2015-09-24-raspbian-jessie.img of=/dev/sdd Please note that block size set to 4M will work most of the time; if not, please try 1M, although this will take considerably longer.

10. Also note that if you are not logged in as root you will need to prefix this with sudo.

11. The dd command does not give any information of its progress and so may appear to have frozen; it could take more than five minutes to finish writing to the card. If your card reader has an LED it may blink during the write process. To see the progress of the copy operation you can run pkill -USR1 -n -x dd in another terminal, prefixed with sudo if you are not logged in as root. The progress will be displayed in the original window and not the window with the pkill command; it may not display immediately, due to buffering.

12. Instead of dd you can use dcfldd; it will give a progress report about how much has been written.

13. You can check what's written to the SD card by dd-ing from the card back to another image on your hard disk, truncating the new image to the same size as the original, and then running diff (or md5sum) on those two images.

14. The SD card might be bigger than the original image, and dd will make a copy of the whole card. We must therefore truncate the new image to the size of the original image. Make sure you replace the input file if= argument with the right device name. diff should report that the files are identical.

17. Remove the SD card from the card reader

2. Run Setup icon and button will appear on touch screen side

3. Run Setup icon on car side

4. Press FORWARD button to move the car in Forward direction.

6. Press Speed Up button to Increase the car's speed.

7. press Speed DOWN button to Decrease the car's speed.

8. Press LEFT button to move the car in the Left direction.

9. Press RIGHT button to move the car in the Right direction.

12. Need not to take tension of preventing it from hitting walls as it will automatically stop when it is about to.

What Our project can do and its possibility in future.

1. This car can be controlled from any location in the world. Once the car has the camera installed on it, it need not to be in Line Of Sight (LOS) anymore.

2. This car can be used for the surveillance system after mounting a camera on it.

3. We can use it as a vehicle for delivering the small loads, how about your morning tea coming to your bed.

4. Ease of control: It is being controlled by capacitive touch screen which can easily fir in the pocket. There is also a possibility to control the car with hand gestures by using leap motion.

5. After a little reprogramming, it can be used to perform regular errands.

High Level Overview of the structure of your software

The initial build of over 35,000 Raspbian packages, optimized for best performance on the Raspberry Pi, was completed in June of 2012. However, Raspbian is still under active development with an emphasis on improving the stability and performance of as many Debian packages as possible.

Tkinter is Python's de-facto standard GUI (Graphical User Interface) package. It is a thin object-oriented layer on top of Tcl/Tk.

Tkinter is not the only GuiProgramming toolkit for Python. It is however the most commonly used one. CameronLaird calls the yearly decision to keep Tkinter "one of the minor traditions of the Python world."

No we are not using Gstreamer.

This is what they do and this is how they interact.

Here is the summary of the key functions from socket - Low-level networking interface:

2. socket.bind(address): Bind the socket to address.

4. socket.accept(): The return value is a pair (conn, address) where conn is a new socket object usable to send and receive data on the connection, and address is the address bound to the socket on the other end of the connection. At accept(), a new socket is created that is distinct from the named socket. This new socket is used solely for communication with this particular client.

For TCP servers, the socket object used to receive connections is not the same socket used to perform subsequent communication with the client. In particular, the accept() system call returns a new socket object that's actually used for the connection. This allows a server to manage connections from a large number of clients simultaneously.

5. socket.send(bytes[, flags]): Send data to the socket. The socket must be connected to a remote socket. Returns the number of bytes sent. Applications are responsible for checking that all data has been sent; if only some of the data was transmitted, the application needs to attempt delivery of the remaining data.

6. socket.colse(): Mark the socket closed. all future operations on the socket object will fail. The remote end will receive no more data (after queued data is flushed). Sockets are automatically closed when they are garbage-collected, but it is recommended to close() them explicitly. Note that the server socket doesn't receive any data. It just produces client sockets. Each client-socket is created in response to some other client socket doing a connect() to the host and port we're bound to. As soon as we've created that client-socket, we go back to listening for more connections.

4. Detecting the input signal coming to car from touch screen through WiFi. (done by Divakar Maurya)

We have delivered what we proposed in our Project Proposal. In fact, we also successfully completed the part which was declared as an additional section to our project. We also managed to complete the basic functionality of our project quite before.

As, we have implemented according to our Project Proposal. There is no remaining part to be implemented. But, Still we can add or modify in order to achieve new features and functionalities.

1. We can use advanced version of touch screen instead of using capacitive touch screen for better sensitivity.

2. We can use leap motion sensor to control the car.

3. If we use tyres with better grip, the car can be made to run on difficult terrains.

4. The car can also be programmed to run on a predefined path (viz. a parabolic path).

5. The car can be used to run daily errands (like a delivery van from kitchen to drawing room). Just need to reprogram it.

2. We also got the idea of socket programming and various protocols taken care of while implementing it.

3. Due to a small negligence, the whole setup may become a trash. As happened in our case, when due to someone else's carelessness, the motor driver shield touched the metallic part of chassis and got short circuited.

4. We realized that every electronic component should always be kept in spare.

5. We learnt how to control the speed of a DC Motor using PWM on Enable Pin of Motor Shield.

6. Enhanced the capability of working in a team.

7. The joy we felt after seeing it moving for the first time after losing components was unprecedented.