From eLinux.org
(Redirected from WITCH)
Jump to: navigation, search 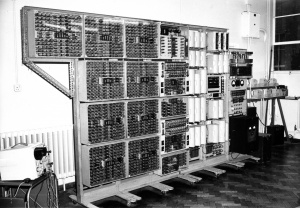 NOTE: the WITCH-E project has been moved to it's website at http://www.witch-e.org

The Harwell computer, later known as the Wolverhampton Instrument for Teaching Computing from Harwell (WITCH), or the Harwell Dekatron Computer, is an early(1949) British dekatron and relay based computer. It is currently on display at The National Museum of Computing at Bletchley Park, where it is described as "the oldest original functioning electronic stored program computer in the world".

The computer was built and used at the Atomic Energy Research Establishment in Harwell, Oxfordshire. Construction started in 1949, and the machine became operational in April 1951. It was handed over to the computing group in May 1952 and remained in use until 1957.

It used dekatrons for volatile memory, similar to RAM in a modern computer, and paper tape for input and program storage. Output was to either a Friden teleprinter or to a paper tape punch. The machine was decimal and initially had twenty 8-digit dekatron registers for internal storage, which was increased to 40 which appeared to be enough for nearly all calculations. It was assembled from components more commonly found in a British telephone exchange.[8] Although it could on occasions act as a true stored-program computer, that was not its normal mode of operation. It had a multiplication time of between 5 and 10 seconds, very slow for an electronic computer.

The WITCH was donated to the Museum of Science and Industry, Birmingham in 1973. After the museum closed in 1997, the computer was disassembled and stored at the Birmingham City Council Museums Collection Centre.

From September 2009, the machine was loaned to The National Museum of Computing at Bletchley Park, where began to be restored to working order as a Computer Conservation Society project.