Difference between revisions of "BeagleBoard/BeagleWire"

The BeagleWire is an FPGA development platform that has been designed for use with BeagleBone boards. BeagleWire is a cape on which there is an FPGA device - Lattice iCE40HX. The Lattice iCE40 is a family of FPGAs with a minimalistic architecture and very regular structure, designed for low-cost, high-volume consumer and system applications. The significance of FPGAs is continuously increasing, as they are more and more often used to support ARM processors. BeagleWire does not require external tools (JTAG) and the whole software is Open Source. iCE40 is an energy saving device, allowing to work with small batteries. FPGA cape allows easy and low cost start for beginners who would like to take their first steps in working with FPGAs. The developed software will be an easy and, at the same time, efficient tool for communication with FPGA. At this point FPGA will be able to meet the requirements of even more advanced applications. The BeagleWire creates a powerful and versatile digital cape for users to create their imaginative digital designs.

BeagleWire software support is still developing. A lot of useful examples and ready to use solutions can be found there. For communication between FPGA and ARM, GPMC can be used. This is an easy and efficient solution. BeagleWire software repository has special components for it. You can just map your logic in BeagleBone memory. A lot of examples have kernel driver e.g. SPI, GPIO. After preparing the FPGA device you can use it as a typical GPIO/SPI from user space. A part of examples do not belong to kernel subsystems e.g. rotary excoder, ultrasonic ranger sensor or blink leds. In these examples, you can connect to FPGA using write/read operation for /dev/mem file.

The project is the result of the community work and it is still under development. If you can support this project or if you have any questions, feel free to contact us.
Michael Welling mwelling@ieee.org
Patryk Mezydlo mezydlo.p@gmail.com 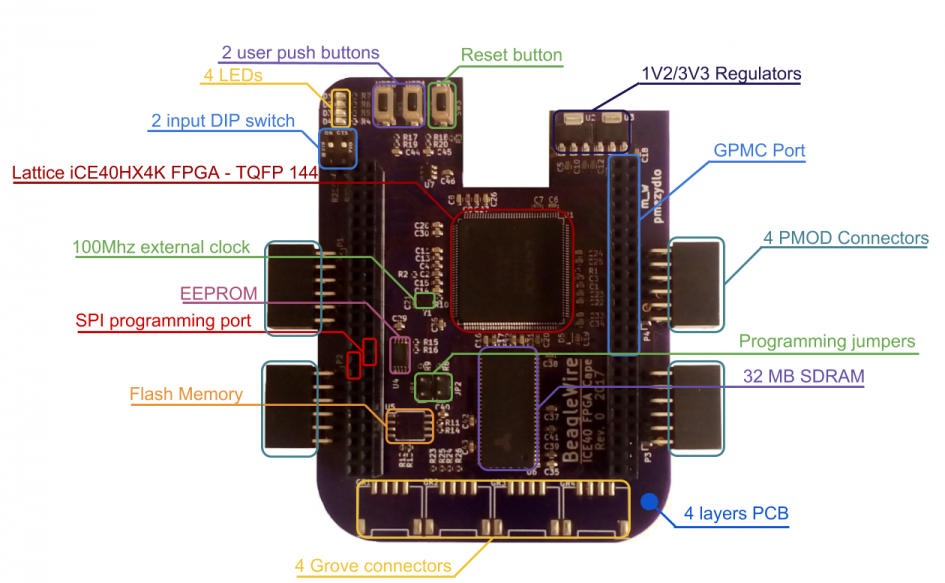 The GPMC bus is documented in section 7.1 of TI's Technical Reference Manual for the AM335X series.

The GPMC pins on the AM335x are shared with the eMMC pins on the BeagleBone Black. The internal eMMC will need to be disabled and the device booted from an SD card before the GPMC bus will be usable.

Programming is done by SPI interface. BeagleWire uses second BeagleBone SPI port. SPI frequency should be between 1Mhz and 25Mhz.

BeagleWire contains four Digilent Inc. Pmod ports. The Pmod standard has a lot of ready modules. Thanks to four Pmod ports we can use as many as 32 additional pins.

There are four blue LEDs.

BeagleWire has two DIP switch. "ON" position is treated as logical zero.

There are two user buttons. A Schmitt trigger is used for hardware debouncing.

Two lines are directly connecting BBB and BW. These lines do not have intended use. In many applications they are used as interrupt lines.

BeagleWire contains four Grove connectors. First and second connectors are used as I2C. Other connectors have no destinations.

Unpack image and write the image to the memory card (please check if you have the correct SD card device — in my case it is /dev/sdd):

It should be noted that the Beaglewire image requires a newer version of U-Boot on the eMMC to properly load the devicetree overlay for the FPGA manager. The easiest way update the bootloader on the eMMC is loading the latest image from Beagleboard.org.


Once the BBB is loaded with the latest image, insert the MicroSD, power cycle and it should boot into the quick start image. The default login is as follows:

Programming the FPGA from the BeagleBone

To check how programming is proceeding, use:

To build the above example:

To load bitstream to FPGA:

Prepare a custom kernel image, an easy instruction on how to do it can be found here: BBB prepare image instruction. Attach(<M>) FPGA-mgr and iCE40-spi driver. Linux kernel should be version 4.12 or newer.

BeagleWire cape has a EEPROM memory, so that the BBB device overlay is automatically loaded up on each boot up. EEPROM contents and loading script are located in BeagleWire software repository.
Check BW_EEPROM.bin content:

Device Tree is required for enabling SPI and GPMC.
Install the DTS compiler:

Copy dtbo file to /lib/firmware on the BBB:

Install toolchain on PC or BBB.
On PC:

BeagleWire software repository has a lot of different sources. The following description shows how to use it. Examples can be divided into two parts. The first part is the simplest examples which do not have their own subsystem in Linux kernel e.g. rotary excoder, ultrasonic ranger sensor or blink leds. In these examples we can connect with FPGA using write/read operations for /dev/mem file. The second part consists of examples with kernel driver e.g. SPI, GPIO.