The goal of this project is to establish a connection between a Wio Terminal as host and BeagleConnect Freedom via the Greybus protocol using MicroPython. This would come along with basic GPIO, I2C, SPI, PWM, ADC drivers interfacing with Zephyr RTOS via Greybus. MicroPython is a C implementation of the widely known and used Python3 language aimed specifically to run on a microcontroller. A ported MicroPython would allow for easy out-of-the-box development and prototyping with BeagleConnect Freedom, Python being an easy to learn and use language, with powerful capabilities at the same time being very concise. The drivers would be written in C as an extension and interface to MicroPython. The port itself along with additional extensions would be based on the official documentation by MicroPython for porting the language. Additionally after the MicroPython port and writing the basic drivers I could test them in practice using the supported MikroElectronika boards.

The Wio Terminal is a ATSAMD51-based microcontroller with wireless connectivity over bluetooth and Wi-Fi. Therefore a connection between the Wio and BeagleConnect Freedom can be established in a number of ways: either directly by wire using I2C protocol, SPI or UART or wireless by Bluetooth. With a big range of possible connections, developers will have a number of possible design options.

The Beagle Connect Freedom can deploy its connected peripherals as well as its own GPIO pins via Greybus and would allow for establishing an easy connection through that to the Wio Terminal. This way communication between the peripherals connected to the BC Freedom (which could also be wireless) will be easily accessible from the Wio Terminal over the Greybus.

Before doing anything else, MicroPython itself needs to be ported to work on Zephyr RTOS and the BealgeConnect Freedom itself. A work-in-progress port for Zephyr would be the starting point for this part of the project. Ensuring that a minimal build with a simple REPL loop can be built and run on the BeagleConnect board would be the next step. 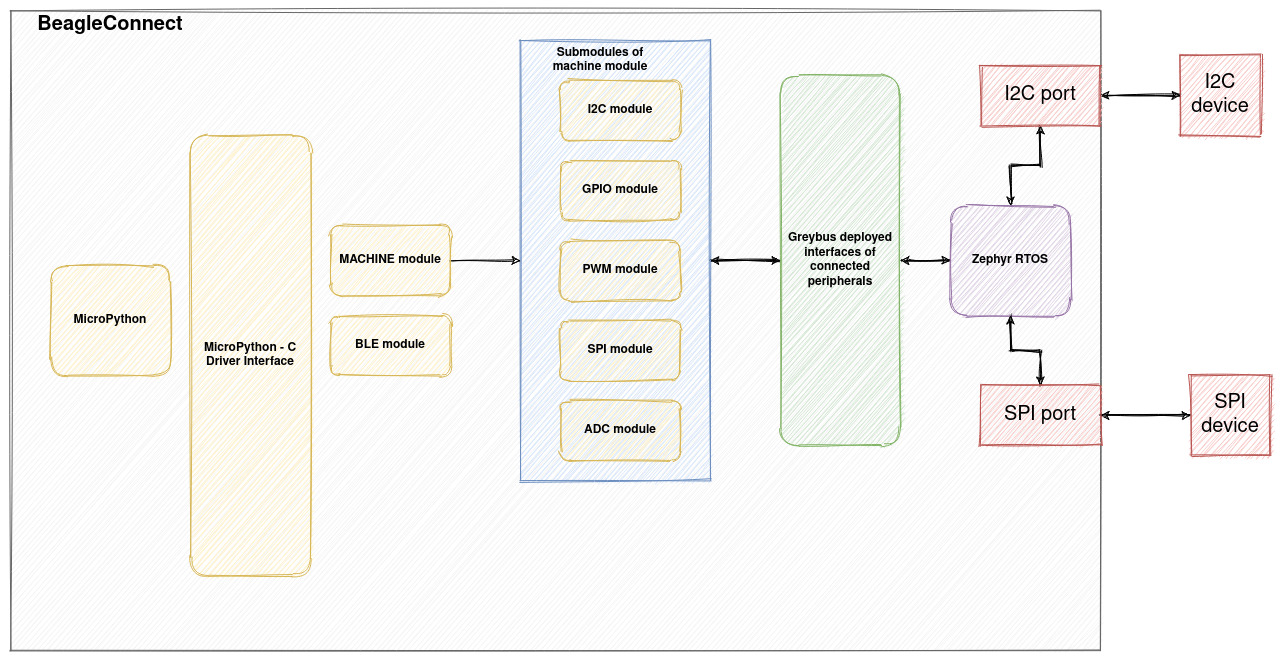 The GPIO driver should allow developers to manipulate and read from GPIO pins on the BeagleConnect Freedom. Actions such as setting a pin to HIGH, LOW or reading current state would be required. More detailed explanation of necessary functions and constructors can be found on MicroPythons documentation for GPIO module. As mentioned before this driver will interface with the device interface deployed by Greybus.

The I2C module allows for 2 wire communication using the I2C protocol. This should allow for software and hardware I2C connections, sending data over I2C, receiving data and scanning for connected devices. There already is an existing driver for Zephyr RTOS, but it would need to be rewritten to interface with the device interface deployed by Greybus. Full list of requirements for I2C can be found here.

The SPI module allows for 4 wire communication using the SPI protocol/interface. The driver should allow for software and hardware SPI connections, sending and receiving data over SPI. Just as all the other modules, full list of requirements for SPI driver can be found here and will interface with the device interface deployed by Greybus. If needed, Zephyr driver found here can be used as inspiration.

The PWM module allows for Pulse-Width modulated signals sent from GPIO pins with PWM capabilities. More information on PWM can be found here. This is not implemented in the main MicroPython library, so it will be based on the port specific implementation for ESP8266/ESP32 with documentation examples which can be found here. Similarly to previous modules it will interface with the device interface deployed by Greybus. If needed, Zephyr driver found here can be used as an inspiration.

The ADC module provides an interface to analog-to-digital convertors. In principle, it should allow continues voltage to be converted to a discrete, quantized value from a particular pin. Full list of requirements can be found here and will interface with the device interface deployed by Greybus. If needed, Zephyr driver found here can be used as an inspiration.

While working with Raspberry Pi

Since the project requires mostly individual work on the project, I will make sure to get in touch with the BeagleBoard community to get feedback/help from more experienced developers if my mentor is not available. It is crucial to remain calm when a big obstacle is met in project development and I so keeping that in mind I will look for alternative solutions to the problem. Additionally there is plenty of information to help me out already available in MicroPython documentation as to how porting should be done and many examples of already complete ports on MicroPython's github. If taking the above into consideration I still do not find the answer, I can ask on relevant subreddits for help (such as r/AskElectronics, r/embedded and r/FPGA) as there are other smart people who may know the solution to my problem :).

Also I could look at the already ported versions of MicroPython and their implementation of all those drivers.