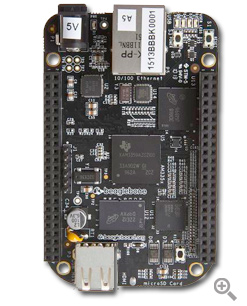 This page documents installation, use, maintenance, and software development using Linux on a BeagleBone.

The official distribution shipped with the BeagleBone is [2]. Angstrom is built upon [3], and has targets for many popular embedded Linux boards.

Documentation regarding building Angstrom from source can be found on the Angstrom page at the Angstrom website. For BeagleBone, use MACHINE=beaglebone

TODO: Also tell how to get from a built angstrom distro to something installed on the SD card.

To build just the kernel, run the following:

TODO: tell where this kernel shows up and what to do with it (copy to SD card).

TODO: Figure out how to actually do this (nobody seemed to know when I asked last time).

Prebuilt toolchains can be downloaded from the Toolchains page. For BeagleBone, The armv7a-vfp-neon toolchains will work for the BeagleBone.

The modern Linux kernels (version 3.8) for the BeagleBone Black (and also the modern kernel on the BeagleBone), is implemented and maintained as a set of patches ahead of the mainline kernel, along with a script to download a mainline kernel and patch it accordingly. This is the same kernel (mainline and patches) which is in the Angstrom build.

To Build a kernel, check out the beagleboard/kernel Github project, making sure to use branch 3.8. The README.md contains exact steps for building the kernel and copying it to your BeagleBone.

The BeagleBone uses the [4] bootloader. TODO: What's the official u-boot to use, and how to build it? TODO: Where is the official uEnv.txt? TODO: Is there a list of uEnv.txt variables which work with the installed bootloader? TODO: How to set the HDMI resolution?

Build software with a cross toolchain