Work in progress: plan is to first collect the raw info, then organize and add prose. -- Matthijs (talk)

Update: unfortunately I had to shift my attention elsewhere before I could finish this page. I'm still adding or fixing little bits and pieces now and then, but feel free to contribute raw info, organization, or prose ;-) -- Matthijs (talk) 14:24, 15 January 2016 (PST)

Although the PMIC supports direct connection of a Li-ion battery (including charging), this functionality is not officially supported on any BeagleBone. Nevertheless, the terminals for this are available on an unplaced header (pins labled TP5-TP8) for experimentation.

If your power needs are sufficiently modest, implementing a workaround for the 3v3 regulator bug is not very hard.[2]

Keep in mind though that a Li-ion battery only has a nominal voltage of 3.6-3.7 V, which will render the USB host port unusable and may cause 3.3V supplies to lose regulation if too much current is drawn or the battery has insufficient charge left.

RTC-only mode (SLEEP state of PMIC, only Power Path and LDO1 enabled) is likewise not officially supported and will also trigger the 3v3 regulator bug on affected boards. It may also fail for other reasons. See [3] and [4] for an overview of the problems and affected BeagleBone versions.

Power-up by ramping up 5v versus pressing the power button on a powered system in off-state: 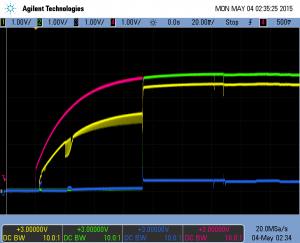 (Apologies for not having placed the ground reference level the same in the two images.)
The power button pin (yellow) shows all sorts of funny behaviour and often the internal rc oscillator of the pmic is highly visible there. I have no idea why battery terminal (blue) was probed extensively in the second case but not the first one. (In these images "bat_sense" (TP6) is tied to vbat (TP5) to allow the PMIC to correctly monitor it. Otherwise behaviour on vbat is far more erratic.) The spikes occurring roughly 50ms after vsys is enabled are due to the regulated supplies being turned on.

Zoom-in image of the 5v ramp up: 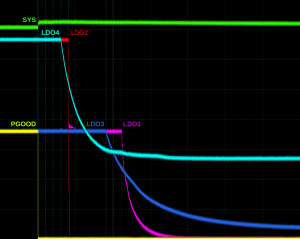