Difference between revisions of "Bootchart"

Bootchart is a tool for performance analysis and visualization of the Linux boot process. Resource utilization and process information are collected during the user-space portion of the boot process and are later rendered in a PNG, SVG or EPS encoded chart. For embedded systems several developers have tried to use bootchart to analyze boot time, but problems arose. There have been several efforts to modify bootchart to make it more useful for embedded development.

Like Bootchart Lite, an implementation of the ideas from "embootchart".

Busybox has a C implementation of bootchartd. It compiles to less than 40k (static uclibc i386 build). It will be available in the busybox-1.17.0 release. Please send bug reports, improvements to busybox mailing list.

Note that if you're using an initramfs, you'll need

Note also that bootchartd tries to create a gzipped tarball, so you either need a full tar with gz support, or you need to enable FEATURE_SEAMLESS_GZ in busybox. If 'tar -z' is not working, bootchartd will not produce output.

To use this, capture the bootchart information using bootchartd, then transfer the information to your host machine, and use bootchart to produce a graphic chart of the boot sequence.

After downloading bootchart2 and running 'make', you can generate a graph (bootchart.png) with:

An example graph, generated in a different way, is shown below: 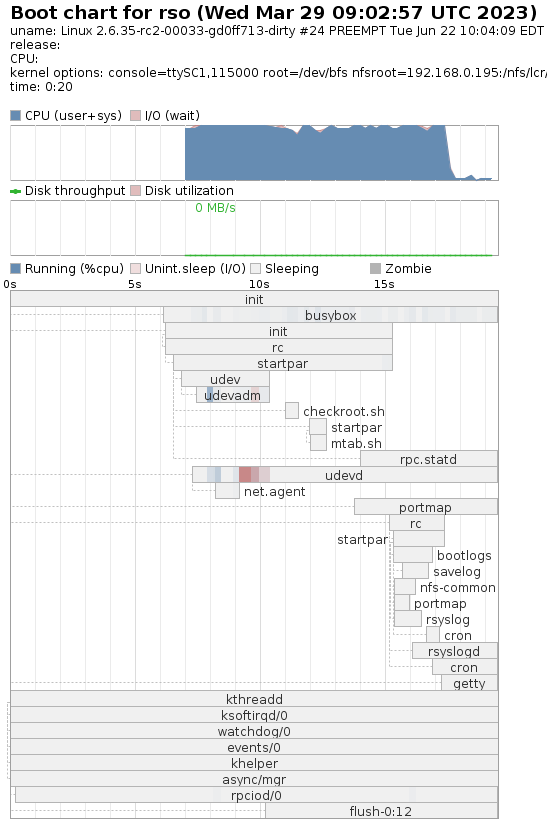 A related project is a set of System Tap scripts to provide information about boot time. See Bootprobe

Bootchart has been forked and updated and can be found on github https://github.com/mmeeks/bootchart (Main changes: no java, better visualization)

Another fork (the same?) can be found here: Updated Bootchart