Difference between revisions of "Buildroot:DeveloperDaysFOSDEM2019"

It is possible to join online by going to https://appear.in/buildroot

And of course, patchwork cleanup! Triage into the following categories:

General Assembly took place on February 5, 2019 from 13:00 to 13:15 after being delayed for a day with unanimous agreement of the members present.

After some discussion, the decision is that the patches are simple enough and the feature is useful enough to apply the patches. The only thing to check is that unsupported download methods (e.g. git) should do a full download.

How to deal with the reproducibility of tarballs that we create from Git repositories? We currently require a specific version of tar, and also a specific variant of gzip. Some people think this is becoming annoying. Arnout has proposed to hash the contents of tarballs instead of the tarballs themselves, by introducing a new type of hash. Yann disagrees. We need to discuss this to reach a consensus. We discussed three options:

Drop support for branches and other unstable refs. It confuses users: when they give a branch name as version, they expect it to be updated on every build, while Buildroot will use the cached tarball. Excluding branch names is a little bit complicated by the fact that we are actually creating branches currently, so to be able to use existing git caches, the git helper should first delete existing branches.

"Config.in.host" for all host packages

See 1st and 2nd parts of the discussion.

There are two reasons for this feature:

Note that for the first advantage, it is not needed to have a Config.in.host option for everything. But we do need to have a correct select for the config options that do exist. So we would need to add a check that a package that is built is also selected. Such a check exists already, but it is disabled for host packages. However, having such a partial transition would be really confusing. How does a contributor decide if a new host package requires a Config.in.host option? We could have such a half-baked situation for some time during a transition period, but having it long-term is really not nice.

For the second advantage, the list really needs to be accurate. That includes dependencies that are now added by the infra, e.g. cmake, or things handles by support/dependencies. For the infra, we could add "select BR2_PACKAGE_INFRA_CMAKE" to every cmake package Config.in, but that is adding a lot of complexity...

After some discussion, we found that the advantages are not strong enough for the added complexity and confusion.

We certainly want the list to be either correct or not to exist.

The md5sum approach definitely works, but it is too slow, especially for host/staging, because we have many files in there (e.g. from the toolchain).

To get an accurate list, we can just take a stat() on every file before and after the configure/build/install, and check the difference. In fact, find has options to print the relevant stat info. This is not too much overhead; we just run the find that we have now twice instead of once. One little problem is that if the user does 'make foo-configure; make bar; make foo', the changes from bar will be included in the diff for foo - but for such manual intervention, it's OK if the package list is inaccurate. Note that there would still be a problem for packages that install things in extract or patch, but we probably don't cover that at the moment either.

For 2019.02, we don't want to make too big changes anymore - especially since the patch series will not be ready tomorrow. However, a simple fix is to just create a list of stat output and take the diff only in the post-install instrumentation. This is definitely an improvement over the current situation and a small patch. It can be included in 2019.02 even if it only gets sent next week.

Just the license is not good enough a reason for us to handle the maintenance for free. If upstream chooses to change the license, the users will either have to handle things on their own or pay for a commercial license.

Thus, the plan is to drop 5.6 after 2019.02. We will even drop the version option entirely - we don't have version choices for other packages. 5.12 will be an LTS version. For 5.13 and 5.14, there may be some push for introducing the non-LTS Qt5 version because it has some nice new features. We can decide at that point if we re-introduce the choice, but we prefer to avoid it. In general, we try to use only LTS Qt5 versions in Buildroot, because the maintenance windows don't overlap nicely with Buildroot releases.

Ideas have been collected on [1]

Arnout and Thomas will do application.

Should init scripts be executable in the Buildroot tree?

It really doesn't matter, there are arguments for either, as long as it's consistent. We randomly choose that they should not be executable.

It would be great to have a list of companies that use Buildroot on the website, to show that Buildroot really is used in a professional context. We can refer to publicly known information e.g. Tesla, and we can of course ask for companies where it is not known so publicly if they'd like to be mentioned.

The "Documentation" part of the website should have a reference to (recent) talks about Buildroot. Angelo will add that.

For sure, we don't want to have a user both in sysusers and in passwd, because then the sysusers entry is useless (it won't be used). So the patch as is is not OK.

Long term, we have the following options for dealing with the sysusers. But we only want to add infra for it when there are several packages using it.

Topics that were not discussed

We're right before the -rc1 cut-off. Should we still apply risky patches? Decision to open next now for the risky stuff, but still keep on applying non-risky stuff to master, and cut -rc1 only after the meeting. We will also do more regular merges of master into next - at least once per -rc release.

In the end, though, no next branch was opened. 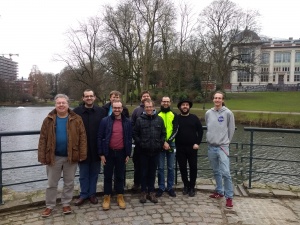 Photo of hackers taking part to the meeting
Retrieved from "https://elinux.org/index.php?title=Buildroot:DeveloperDaysFOSDEM2019&oldid=485466"