Grant and Pantelis independently worked on this.
Grant is looking at how to make DT work with existing tools and workflows

Q: Is this a replacement for the C preprocessor

Q: Why is human readability important?

Q: Are there tools to convert indented (human readable) to braced YAML?

Q: Can you summarise the alternatives?

Q: Are includes support in YAML?

Q: Does it support comments? Are they kept during parsing?

Q: Is the DTB different?

Q: Why to we need to quote "#address-cells"? 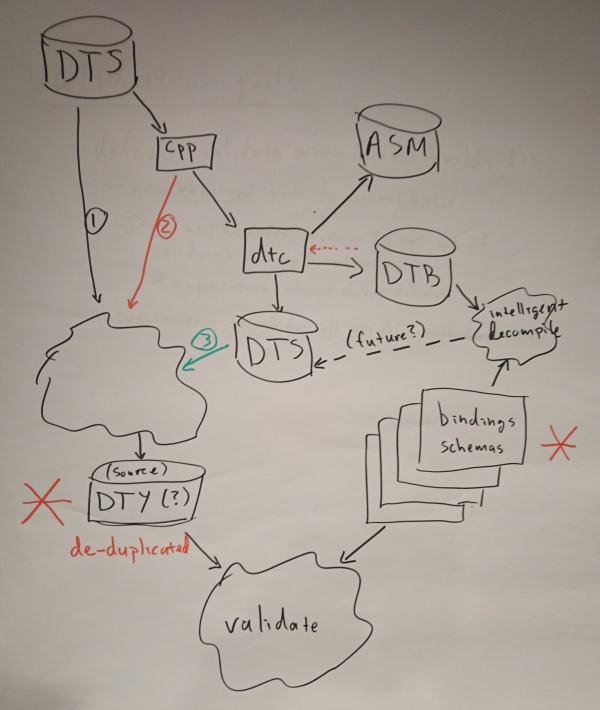 Q: Can the constraint be C code?

Q: Can you show some more constraints?

Who has looked at JSON schema? 3 persons a little bit

At first discarded JSON schema, because he thought it didn't fit.

After looking at YAML schema, it seems JSON schema does actually work.

This would not be written by the schema writer. Would be similar but much more constrained. Have no examples for that. The dt-schema-core would be able to validate a set of standard properties (#*-cells, compatible, interrupt-controller/-parent, ...)

Parts of the schema can be reused in other schemas (size-spec, address-spec)

Documentation can be in the JSON schema files.

Q: how do the errors look?
A: Terrible. But there is context. Could be improved.

Q: Brings additional requirements to build the kernel.
A: Python, ruamel, JSON schema. Could be moved to dtc. Validation would not be required for build, only useful for development.
Should try to run validation during build if requirements are available.

Q: Can we validate busses?

Q: For a sensor connectable via SPI and I2C, do I need copies?

Next steps for schema: Pantelis and Grant need to build a combined proposal.

Q: We need to have a page to read an up-to-date summary on what has been agreed
A: Wiki page and discussion on the devicetree spec mailing list.

Q: do you have helper macros?
A: no

Support counting to size IRQ, DMA structures to the actual requirements Have I2C, Serial, some others, many still missing Only ARM, x86 supported. ARM completed.

Maybe have a templating step to generate code.

Size contraints, ~32KiB
Tools: ftdgrep, dtoc
fdtgrep filters out parts that u-boot doesn't use (40K to 3K), based on libfdt+python
dtoc: builds structs in header files and c files to fill them out. It's used together with fdtgrep

The same drivers in normal u-boot and SPL.
The of-to-platdata code (which uses libfdt) gets replaced by simple assignments.

Android: SOC (base) + board (overlay)
Upstream: board based

Opinions on the source format?

Can the schema validation support the maintainance of the overlay sources?

Which DT Boards in the Kernel?

Q: Which DT boards would be rejected?
A: Only for something extremely configurable like ARM fast models.

cp110-master and cp110-slave are mostly identical, except of internal references, offsets)

Cares about backwards compatibility: use new kernel with older DT from the firmware

Infer as much as possible from compatible or actual hardware

Some vendors are lagging behind mainline devel He likes some things about the old board files.

A graphical tool based on the schematics?

ARM wanted to build a spec on how to build more standard embedded systems.

A place for the specs

Spec is on github, using sphinx

Is a membership org with a steering commitee

It is a generic way to apply a DT at runtime.

What is the status of the patches?

You have the same problem with duplication as with the armada.

You need to have an overlay for each slot where you can connect something.

Doesn't have to be hotplug, could also be used at boot time or in the bootloader

The connector plugin DTB could be untrusted