Early in the class most of the exercises we will do will all run on the BeagleBoard. You'll be able to edit (gedit), compile (gcc) and run all on the Beagle. Later, when we start compiling the kernel [1] or the boot loader, (U-boot) you will need to cross compile on a Linux machine and copy the results to the Beagle.

Instructions for building Ångström are given here; however there are a few changes you have to make. Here's what I did.

The step is to get the crosscompilers, etc. installed. Generally you do this install on your local copy of Linux. Some of these installs can take a long time (one took me 12 hours, slow download times), so you may want to install on a remote server that's always connected to the internet. If so, see the tips [[ | below]]

Get the setup scripts

First install git by running the following on your host computer.

(Here is a nice git tutorial. Take a look at it if you want to understand the commands that follow. We'll explore it in more depth in a later exercise.)

Then run the following to load the meta data.

I have everything in a ~/BeagleBoard, so here is how I setup things:

(The git took 4.5 seconds.) This creates a directory for open embedded (oe) and gets the script to download Ångström. What files do you see?

Setting up for the BeagleBoard

Add the following to the end of the file.

Look at this block of lines:

Here you can tell it how many parallel threads to run. If you have several cores on your machine, make this number big. If you have only one core, you might be better performance setting it to 1. If you have no clue which value to pick, Gentoo users suggest 1 more than the number of cores in your computer. More details are here.

To save you a lot of time, it is useful to disable locale generation for all but the one you need. Add this to local.conf

This will bring in all the tools you need. The config took about 3.5 minutes on my machine, update took about 1 minute.

Before the first time you run bitbake you need to do the following to set up the environmental variables:

Take a look in the file and see what it is doing.

To see if everything is ready, run the following

nano is a small editor. We really don't need nano, but if it can be compiled we know we have everything in place. I get the following error when I run the bitbake:

So, some programs are missing. Install them with:

This took just a few minutes.

This will take a while. Mine first said it has 77 tasks to do. Once those were done it had 1113 tasks.

Below is a table of the times from last year. Add your bitbake time to this year's table.

Once nano is done building you can find it with:

Can you figure out which one is the nano that will run on your Beagle?

The next step is to download and compile the kernel.

We want to keep the kernel source code around so we can experiment with it. Do this:

Find the line near the top that says INHERIT += " rm_work " and comment it out. This will save the source code.

Exit gedit and do the following:

Mine says it has 1032 tasks to do. It took about XX hours to do them. Once done you should get a kernel that will work.

If you accidentally run bitbake without commenting out the above line, after it runs you can comment out the INHERIT line and then run

While were' at it, let's get the boot loader we'll be using...

I think this took a half hour or so.

Once installed you are ready for kernel work.

Installing on a Remove Machine

Installing the cross development tools and the kernel on a laptop is nice, but sometimes the downloads are too long for such a portable device. I've had a bitbake run some 12 hours. Another option is to use a remote machine. In my case our CSSE department has created a virtual machine with Ubuntu 10.4 installed on it. 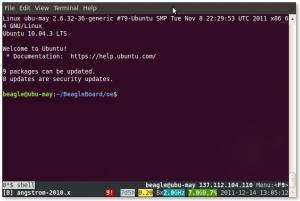