Early in the class most of the exercises we will do will all run on the BeagleBoard. You'll be able to edit (cloud9), compile (gcc) and run all on the Beagle. Later, when we start compiling the kernel or the boot loader, (U-boot) you will need to cross compile on a Linux machine and copy the results to the Beagle.

Tip: Run this exercise using a wired connection if you can. The Ubuntu wireless driver can be finicky, and if it stops working you'll have to restart some of this.

At this point the scripts are downloading the crosscompiler, the kernel sources and anything else you need to compile the kernel for the bone.

At some point you will see 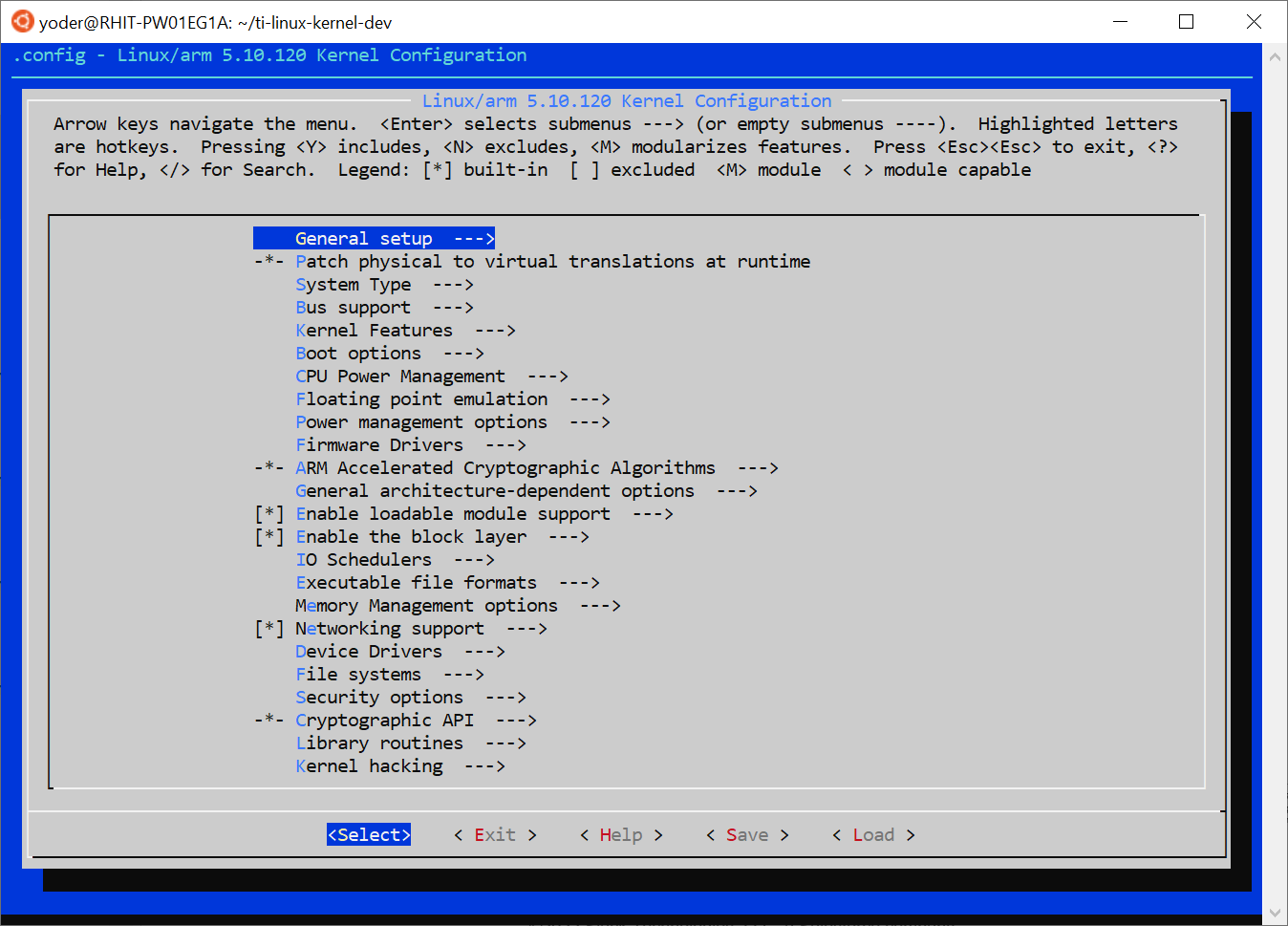 Hit the right arrow to select Exit and then hit ENTER. The compilation will continue.

Stop at this point We'll continue on at a later time.

Installing the 3.8 Kernel on Your Black Bone

Updating and running off the eMMC

EBC_Exercise_23_Configuring_the_Kernel#Making_and_Installing_the_kernel has instructions for copying the correct files to the eMMC to update the kernel.

Booting off the SD card

Here are some optional instructions for booting off the SD card rather than the eMMC.

So far you'be been running everything off the onboard 2G flash. You can continue to do so, but when installing a new kernel there is a good chance you mess up your image and it will be another 45 minutes to reflash it. Instead go back to EBC_Exercise_03_Installing_a_Beagle_OS an instead of installing the eMMC flasher image from [1], install the BeagleBone (Runs on BeagleBone Black as well without flashing the eMMC) image (first list).

This time when you plug in the SD and boot the bone will boot from the SD card (rather than copying a new image to the 2G builting flash). I suggest programming 2 or 3 SD cards with this image. That way if you really mess up one you can always switch to a another card and keep going.

Also, if you are booting from the SD and mess up something, you can plug the messed up card into your host computer and fix things and try it again.

Copying to the SD Card

Now install by inserting the SD to be installed on into your host machine and run:

Mine failed because there wasn't enough space on the VFAT partition for uImage, however uImage isn't needed there, so I just editted install_kernel.sh and commented out line 160

This keeps it from installing on the VFAT partition.

Updating to a new version of the kernel

How do you know if you have the latest version? Run

to see what version you are running. This site lists many different versions. See if yours is the newest, if not continue on.

This post to the Google Group lists the steps as "You need to recheckout master, delete your old branch and re-pull". Here's how you do it.

Hmm.... something has changed. See what it is.

It looks like some configuration setting have changed. Since we are getting a new version of the kernel, let's revert back to the previous file and try again.

Then start over again

Your system.sh file should be unchanged, so start building

Mine took some 26 minutes on an 8 core machine.

While we're at it, let's get the boot loader we'll be using. It takes some 40 seconds.

Now configure and build. The first time takes some 1.5 minutes. After that it's only 5 seconds or so.

Once installed you are ready for u-boot work.

If your Beagle fails to boot, follow the EBC_Exercise_22_Recovering instructions to recover.