The "Hello World" program is the traditional first program for many classes. Flashing an LED is the embedded equivalent. Here we will explore a few ways to flash and LED on the Beagle and explore General Purpose I/O (gpio) along the way.

The easiest way to do general purpose I/O (gpio) on the Beagle is through a terminal window and a shell prompt. In Linux more everything is treated as a file. Even things that aren't files. In our class we'll use a virtual file system called sysfs. sysfs exposes the drivers for the hardware so you get easily use them.

Here you see the directories for controlling each of the usr LEDs. By default, usr0 flashes a heartbeat patter and usr1 flashes when the micro SD card is accessed. Let's control usr0. 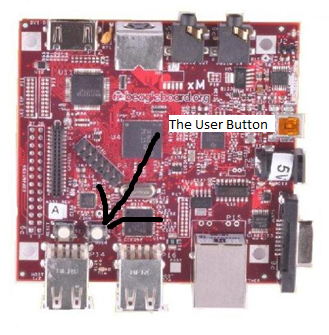 Try holding down the switch and doing cat value again. Does the value change? There's a shell script called readgpiothat will repeatedly read the switch.

Using the BeagleBoard Trainer you can easily access the gpio pins. If you plug in the trainer and boot up the Beagle you will see the gpio pins automatically appear.