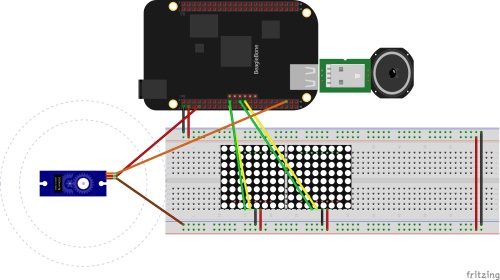 4.) Run the program (this needs to be rerun every time you want to play a new song).

Once the program is running the terminal will prompt you for a Youtube video link. This will be the audio file the program uses so make sure it is entered incorrectly. After this the song should begin playing, the audio visualizer will start, and the fish will begin to dance. All the user needs to do at this point is sit back and enjoy the music.

After the song is finished, if the user wants to listen to a new song, all they have to do is rerun the main program and enter in another Youtube link to listen to.

The user interacts with the computer terminal and selects a song from Youtube. A script handles the input and uses the YoutubeDL library to download a .wav file into the audio downloads folder. Once the file is downloaded, the script runs two processes in parallel: a python file for the audio processing and an aplay command to play the music. Within the python script, we compute the Fourier transform of the audio with the help of various libraries. Once the Fourier transform is computed on periodic intervals of the audio, the python file calls two different interfaces: one to handle the LED Matrices output and the other for the servo motor output.