Picture that summarizes the project.

Give two sentence intro to the project. Comrade Candles are a set of customizable led strips that synchronize colors and flashing speeds over the internet, It also has a sound implementation that allows preloaded songs to be played as well. This allows users to have a creative way to communicate and express themselves with a friend so long as both have an internet connection.

Give two sentences telling what works. Using flask and pagekite, we are able to use a Beagle Bone to run python files on another Beagle Bone. Using this concept, we have implemented a way for the lights to change on one Beagle and Match the other, as well as play matching audio files (so long as both Bones have the audio file downloaded).

Give two sentences telling what isn't working. The IR remote input was not ale to be implemented for the project. With the remote and transceiver we chose to use and a lack of libraries to use for decoding signals. We could not find any consistent patterns that distinguished each signal from the remote, making it impossible for us to implement.

End with a two sentence conclusion. Using the method that implemented the comrade candle project, we are able to create a way to synchronize operations on two bones so long as they have the same scripts on them. While this was used for our comrade candle project, there is a vast range of projects such concepts to apply to. The files should also be able to be modifiable to incorporate more than 2 bones as well. The only negative side is pagekite has only a month long trial so a free solution that could last permanently would be preferred and ideal for a user.

The sentence count is approximate and only to give an idea of the expected length.

Your bone is now ready to run the code! Open a new terminal and run serverLED.py and you'll bone will be ready to communicate. 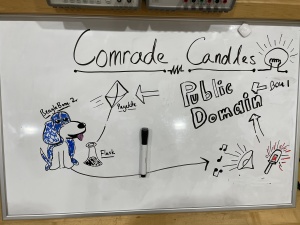 Sam worked primarily on getting the LEDs to run properly with the PRU by using examples from the PRU Cookbook and also helped out Tom with the online interactivity. Tom worked on the Flask and Pagekite features which allowed the Bones to updated each other's LEDs and audio tracks. T.J. worked on the the music playing feature and the IR remote feature that did not end up in the final model of the project. You can read more about that below.