BeagleBall is a physical pinball machine, that will be controlled by a BeagleBone Blue. It will be a table top sized game.

--Give two sentences telling what works. The servo flipper work, however one of them stripped out the internal gearing the night before the demo. The buttons "work" however, the ball is not fast enough to provide enough force to actuate the buttons. The IR sensors work for both scoring points as well as detecting when the ball drops below the flippers.

--End with a two sentence conclusion.

Overall this was a fun project to work on. The most frustrating and time consuming part was trying to find documentation on how to do some things on the BeagleBone Blue. I wish I had been able to complete some more features, but I had to decide whether I wanted quantity or quality because it was taking a lo of time. 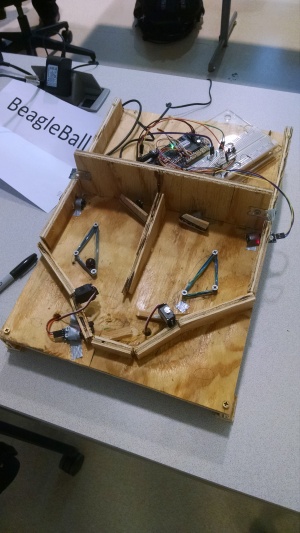 It plays pinball! If you like pinball then this is the project for you. If you want to use it yourself you will have to create a physical pinball machine of course!

BeagleBall keeps track of your score, can tell whenever the ball is missed and goes below the flippers, has IR sensors and bumpers!

The program is written in python, and is pretty much just a running loop. It uses rCape to interface with the servos and has button detection events to detect when the ball hits an button or turns on an IR sensors, and when the user actuates the flippers.

I worked on all tasks in this project. If I continue work on this project, most of the work will likely be done on making a new pinball table and getting faster moving servos.

Faster powerful servos would be nice. A new table could be made based off what is wrong with the current table. If there was a way to get access to more GPIO pins, you could add more buttons and lights and a display!

It would probably be ideal to just ditch the whole idea of the flippers being controlled by servos and just rely on traditional mechanical flippers. Lights, sound, and a display would definitely be great additions.