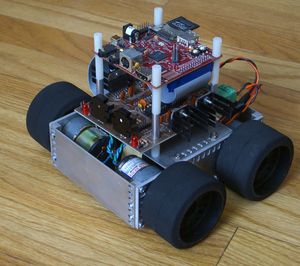 The goal of this project was to create a BeagleBoard-powered robot capable of competing in an autonomous sumo competition in the 3.0 kg weight class (an example). A chassis was constructed of aluminum and an expansion board created to allow the Beagle to control the motors and connect to the sensors. Software was also created to allow PWM control of the motors, but a problem acquiring an important component (an ADC chip to allow reading infrared rangefinders and edge detectors) meant that control was fairly crude, relying on a single ultrasonic rangefinder. Before the robot could meaningfully compete in a sumo competition this issue would need to be corrected and a plow attached to the front. The robot is currently being used for general robotic experimentation.

The goal of a sumo competition is to force an opposing robot out of a circular ring without being either being pushed out or running out of the ring accidentally. In the 3kg weight class, the two opposing robots begin approximately 20 cm from each other in the middle of a 154 cm diameter black dohyo (raised cylinder) with white lines painted along its edge to designate the boundary. The robots may not use any methods other than simple motive force to force their opponent out of the ring and must operate completely autonomously. The robot that forces its opponent off of the dohyo wins the match.

An interface board was designed that implements many of the core features listed above. The board was designed in OrCAD. The schematic, board, and artwork is available here. Please see the included readme. Ideally, the board would be enlarged or everything switched to surface mount components to allow for more features to be added. This design can easily be milled so long as the holes can be plated.

Here are the features that were implemented:

The power input is used directly for the motors and regulated down to 5v and 3.3v. 7.2V rechargeable battery packs can be used.