page under development. this standard is virtually identical to EOMA-68 except that the 24-pin RGB/TTL has been replaced by single-channel LVDS.

These pinouts make no attempt to be electrically or electronically compatible with the existing CompactFlash standard. 16 GPIO pins, Single-channel LVDS for LCD, USB2, I2C, 10/100/1000 Ethernet and SATA-II interfaces are included in the Version 1.0 specification. Note: USB2, SATA-II and Ethernet must support auto-negotiation, and must support the lower capabilities (USB 1, USB 1.1, SATA-I, 10/100 Ethernet). Higher speeds and capabilities are optional.

Two 5.0v power inputs must be provided: all pins are rated at 0.5 amps, so the maximum power dissipation is limited to 5 watts. Design consideration: please note that to ensure that thermal dissipation in an enclosed fanless situation is not exceeded, a maximum of 3.5 watts should be respected. Most systems will not have active cooling.

All High-speed signals (LVDS, USB2, Ethernet, SATA-II) are balanced lines that are still separated using GND or Power pins. All other pins are low frequency. The sixteen GPIO pins are available, for general-purpose bi-directional use of digital data only.

The typical voltages of the LVDS LCD lines should be compatible with the LVDS output from a Texas Instruments SN75LVDS83b, i.e. 1.25V +/- 0.125V, 5V tolerant, and the peak-to-peak common-mode output voltage around 150mV, as illustrated in Figure 3 of the SN75LVDS83b datasheet.

Also, because the GPIO pins can be reconfigured individually bi-directional for any digital purposes, they *must* be made to be 5V TTL tolerant and tri-state isolated, and Motherboards also must be 5.0v TTL tolerant as well as tri-state isolated. Levels when any GPIO pin is used either as an input or as an output should again operate at nominal 3.3v TTL levels, thus expect "High" Voltage of 2.0 volts, threshold of 1.4v and "Low" voltage of 0.8v.

The option to use Gigabit Ethernet is also available, if a given system has it. If, however, a particular system does not have Gigabit Ethernet, the pins must not be used for other purposes, and must be left unconnected. This is to ensure that automatic negotiation of 100/1000 Ethernet occurs correctly.

Regarding the Dual LVDS: All EOMA-CF Cards *MUST* be capable of dual-channel LVDS as well as only single-channel LVDS on Channel 0. 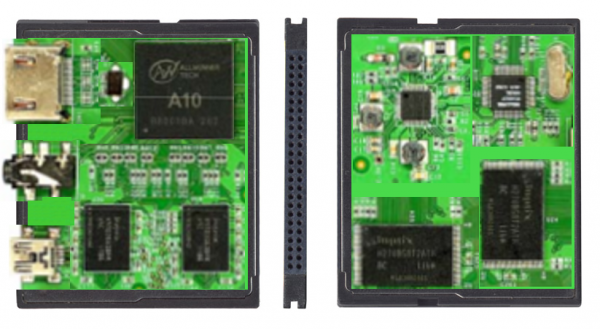