EARLY PROOF VERSION OF THIS PAGE

Today MOTOROLA semiconductor group is sold to Freescale. The so called "company evolution" .... Happened at the end of 2004. When Motorola was running the semiconductors desk, i was provided this IDP board as "68k learner". Since 1999 i have been developping around the board in my free time. She eats 2.5A, so at 5V that means 13Watt .... this because she has a lot of fun and troubles 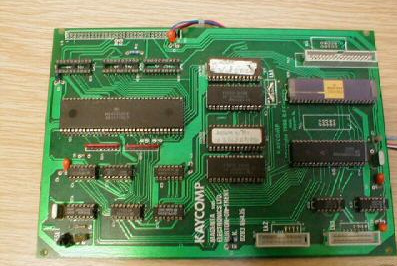 [1985-2005] This is a Kaycomp 68000 Microprocessor board made by "Magenta Electronics" in the UK. This is an older version of the one currently available for 100 pounds. The original kit (1985) included a stiffy disk with a 68000 assembler, a power supply (for the UK) and the 'quick start' documents that came with the kit. I don't have any of this. I have been working to power up the board and accessed the buildt-in monitor program via the serial interface. I have downloaded the 2 ROMs to srec-files (motorola srec format) and combined the two images (upper and lower) to a binary image of the rom, this is nice if you'd like to study the firmware. This board is not working today, but it will be ! If you want to collaborate, you are welcome ! [68000 board Bob Coates January 1986, p67 Bob Coates discusses monitor software, having previously described the working of the board and serial interfacing]