Difference between revisions of "Flyswatter How To"

This guide is for Ubuntu 10.04. For the Windows guide, see Flyswatter Windows How To.

This guide will walk you through connecting the Flyswatter and the Beagleboard to your Linux PC, and installing and running OpenOCD. This guide was written with Ubuntu 10.04.

Connecting the Flyswatter and the Beagleboard

To hook up the Flyswatter and the Beagleboard, you will need:

Connect the RS-232 adapter board to the Flyswatter.

Take the RS-232 adapter board provided in the Beagleboard adapter kit, and connect it to the Flyswatter's serial UART interface. 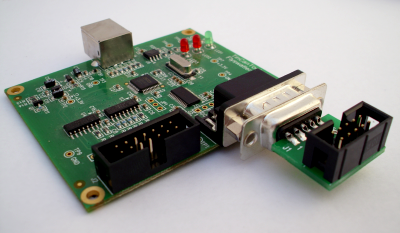 Connect the 10-pin cable to the Flyswatter.

The adapter board above allows you to connect the 10-pin ribbon cable in the Beagleboard adapter kit to the Flyswatter. Do that now. Pay careful attention to the position of the red stripe. The red stripe should line up with the "1" printed on the adapter board, as in the picture below. 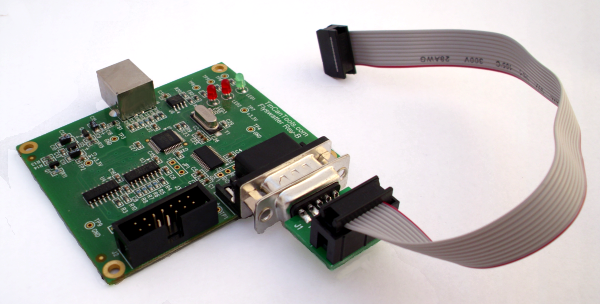 Connect the other end of the cable to the Beagleboard.

Connect the 10-pin RS-232 cable to the pins to the side of the Beagleboard, the ones next to the power adapter. Make sure the cable is correctly centered over the pins, and again pay attention to the red stripe. It should match up with the "1" printed on the Beagleboard. 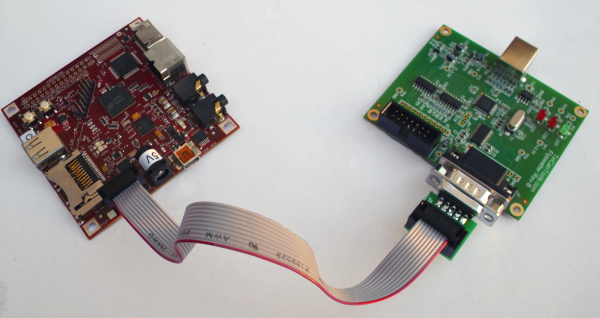 Connect the JTAG adapter board to the Flyswatter. 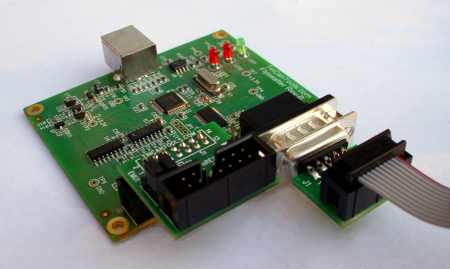 Connect the Flyswatter and the Beagleboard with the JTAG cable. 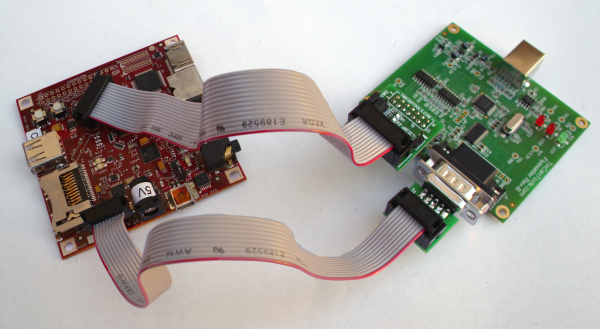 Connect the USB cable to the Flyswatter. 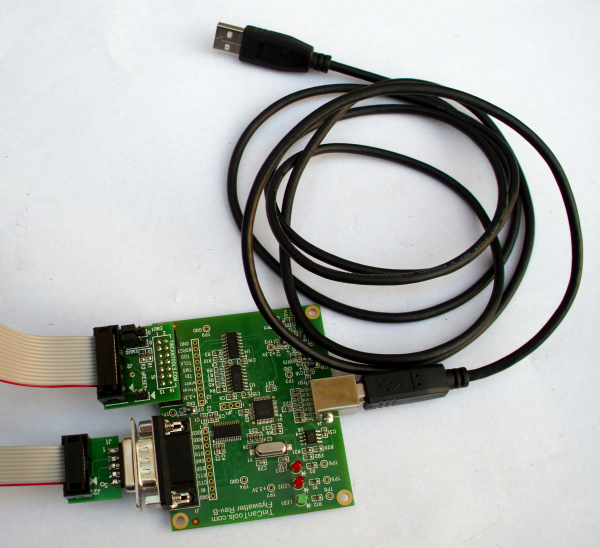 Connect the power supply to the Beagleboard.

Connect the 5V1A power supply to the Beagleboard. (Your power supply may not look exactly like the one pictured.) 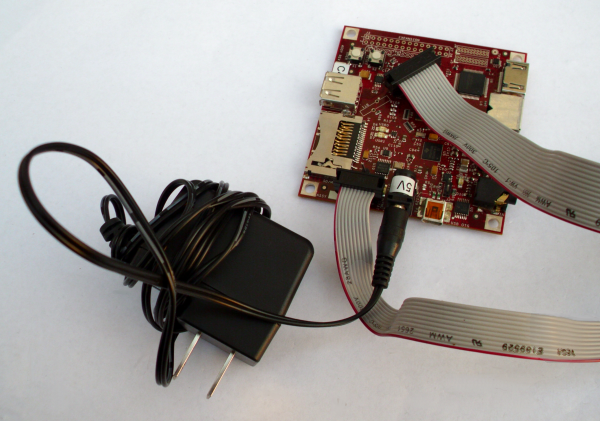 Plug the power cable into a surge protector or wall outlet.

Green LEDs should light up on the Beagleboard to indicate that it is receiving power. 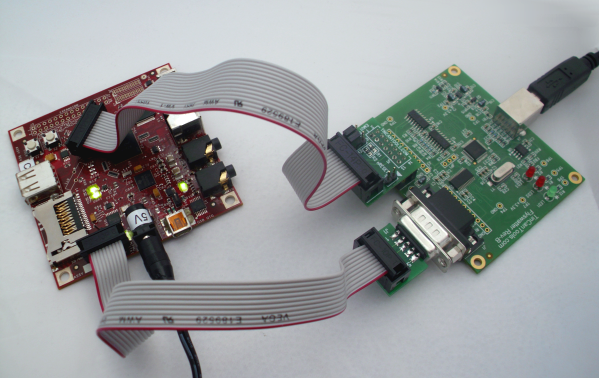 Plug the USB cable into your PC's USB port. 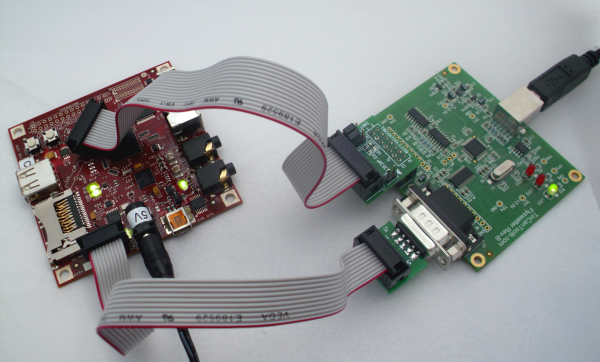 OpenOCD (Open On-Chip Debugger) is open-source software that interfaces with the Flyswatter. OpenOCD provides debugging and in-system programming for embedded target devices. You will need to install OpenOCD, either from Ubuntu's packaging tool or by compiling it yourself.

The easiest way to get OpenOCD is to install it with apt-get. To install OpenOCD with apt-get, follow these instructions:

To compile OpenOCD yourself, follow one of these guides:

The -c init -c "reset init" commands in the OpenOCD startup are a workaround for a bug in OpenOCD that affects the Beagleboard and TI Beagleboard XM. If you start OpenOCD without these commands, you will see errors like this: 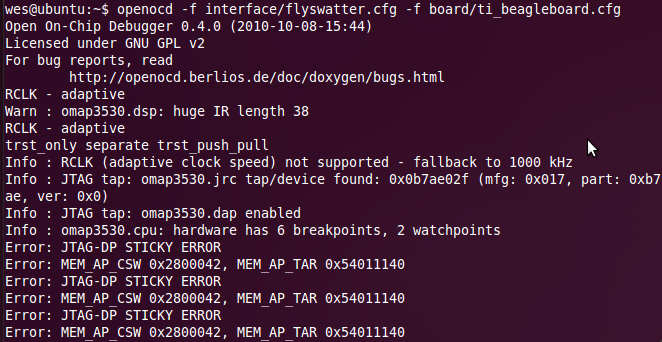 On startup you may sometimes encounter this error:

This output means OpenOCD has failed to initialize the JTAG chain. The -c init -c "reset init" commands are a partial workaround for this error. Look for the following line later in the output:

If you see this line, everything is fine.

Getting OpenOCD to initialize JTAG correctly with the Beagleboard is sometimes difficult. If you are having difficulties beyond those described above, consult the troubleshooting page below.

Resets the Beagleboard. The output of the Reset command should look like this:

You can also use halt followed by a time in milliseconds. OpenOCD waits for the target to halt the specified amount of time, then gives up if the target has not halted. You can use this to avoid OpenOCD hanging because the Beagleboard fails to halt. For example, to send a halt command with a timeout of one second, type:

Displays a numbered list of all of the Beagleboard's registers. 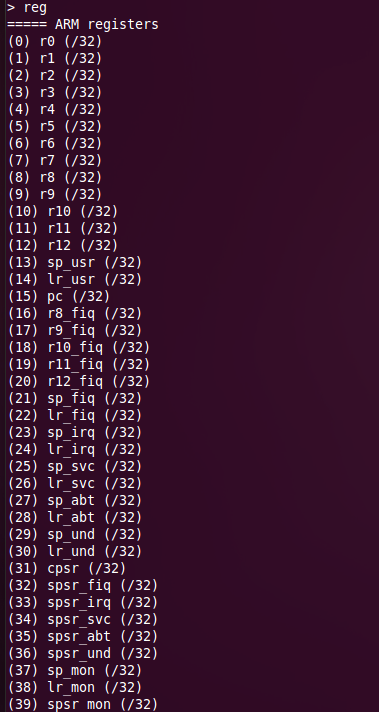