Toolchain are Chain or set of programming tools for building an apps , it could include following :

More info regarding Toolchain can read on Toolchains page.

Earlier embedded devices had very less memory and space and also limited Input-output peripherals, hence Native compilation was not possible or very difficult. But with the advent of powerful embedded ARM processor its now possible to make application on the platform itself. Same can be done in Hawkboard too but Compilation will be slower as compare to that in x86 machine.

Toolchain which are used to compile the application that will run of different machine(architecture) .This is usually used for embedded apps (e.g ARM programming) You program/compile in x86 environment and run in ARM Board. This type of compiling is called cross compiling.

Since native compilation is either not possible or very slow ,Cross compilation present a better alternative for faster development .Only drawback is to properly set build environment and Makefiles. Cross Compilation is most common way of Development in Embedded System.

It similar to native toolchain,but infact toolchain run in virtualised environment on Host.Simple example is QEMU -ARM Running on X86 Linux & you are developing application inside this Virtual environment.

Various solution exists, One is scratchbox ,another is ChrootEABI feature in Ubuntu.

d)Canadian Toolchain The Canadian Cross is a technique for building cross compilers for other machines. Given three machines A, B, and C, one uses machine A to build a cross compiler that runs on machine B to create executables for machine C. Not practiced normally .

There are various ways to compile the application natively on hawkboard.

If you are using Ubuntu as Development Host,Ubuntu provides a Script Rootstock that provides a easy way of making Root Filesystem.Give gcc,vi,g++ as seed parameter to rootstock script and you will have a GNU Toolchain inside the rootfs.

Then write/compile/run as you do for x86 program.

This needs rootstock to installed on Ubuntu (9.10)

imagesize is max size allocated to rootfs.you can keep it same as ur USB Drive /SD card .

Seed parameter tells which packages to be included in rootfs.include atleast gcc,vim (any editor),build-essential packages.

This will take couple of hours to completely download packages you have mentioned and to make a rootfs.

After completion of command it will create some file such as

The sample RootFS Containing gcc,vi etc is available for Download at

Select atleast Toolchain to get GCC.

Fedora like ubuntu's rootstock provide a script rfsbuild that generates rootfs you can include gcc in package list to include it as native toolchain.

Even though you havent selected gcc as packages in any of the above distribution you can use the native gcc toolchain from Impactlinux. Download from here [1]

Extract and properly export the path of native-compiler-armv5l/bin and you can compile the apps on hawkboard. use [Static linking] instead of dynamic linking .

This toolchain uses uClibc instead of standard glibc as library which better suited for embedded environment.

There are Lots of readily available tool chains that you can extract and start compiling apps on x86 architecture and finally load and run on hawkboard.

This is the most common toolchain used for OMAP.Codesourcery provides both a free version and licensed release toolchain. Free version can be downloaded from the link below

Run the installer and follow the steps it presents to install the package.

if you are using tar file than extract

If you installed in the default path, you can find the files at /home/<user>/CodeSourcery. Ensure the Code Sourcery tools are in the path by adding the following

Note: 1.On ubuntu it might fail as it uses 'dash' as a shell (the Debian shell). To reconfigure for the bash shell, use the following command:

2.If you are using 64-bit Linux host, ensure that ia32-libs are installed

ImpactLinux Provides a uClibc based Toolchain

If you are using a Fedora as host environment than easiest way is to use Fedora ARM Toolchain. Fedora provides arm toolchain packages for i386 and x86_64 that are built from the same sources as the Fedora native toolchain packages (binutils, gcc, gdb, glibc.) To install this toolchain on your Fedora machine, do:

To cross-compile the canonical Hello World example for ARM, do:

You can also use the cross-toolchain to cross-build an ARM Linux kernel, by changing these two lines in the top-level Makefile:

and then building your kernel as usual.

There are various Toolchain building Scripts to make a Custom toolchain ,If you are not planning a prebuilt Toolchain from Codesoucery.

Crosstool-NG is script to make toolchain,its very versatile tool.
Some notable features are

Buildroot is a set of Makefiles and patches that makes it easy to generate a cross-compilation toolchain and root filesystem for your target Linux system using the uClibc C library. Buildroot is useful mainly for people working with small or embedded system.

Scratchbox is a cross-compilation toolkit designed to make embedded Linux application development easier. It also provides a full set of tools to integrate and cross-compile an entire Linux distribution.

Bitbake is the tool used by OpenEmbedded. The best way to get started is probably by just building an existing distribution that uses openembedded (e.g. Ångström, see http://www.angstrom-distribution.org for details).

Once the application has been compiled on the Host ,It needs to Transferred to Hawkboard. One of many ways could be used.

1.NFS Boot:- If you are using NFS Boot to load RootFS,Then you can simple copy paste the Binary in home dir or any folder of NFS Shared folder.Once Binary has been transferred execute it as usual.

2.SD/USB Drive-Binary can also be transferred if you SD Card or USB Port is empty by inserting the Card or USB Drive Containing the Binary,Mounting and subsequently accessing it.

3.FTP /SCP :-If RootFS contains ftp or scp you can also used that to copy compiled binary from Host to Target(Hawkboard)

3.Wget Preferred method would be to wget the file from Host,It avoids need of setting FTP or SCP,only thing is that you need to share the File containing binary through HTTP Server.

Python has a simple HTTP Server in built,And since most Linux machine will containing python to share the binary over HTTP on host

This will start http server on port 8000 ,on Target simply run wget to access the file

There is module in ubuntu that allows binaries of other machine(ARM,MIPS etc) to allowed to run along with X86 binaries

This creates a chroot environment in folder /home/<user>/eabi-chroot 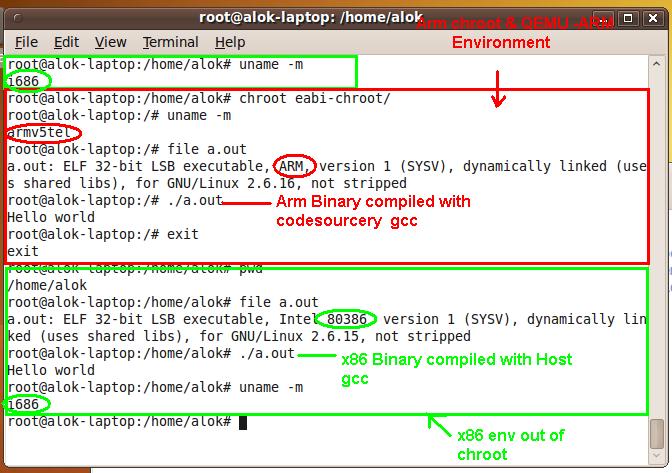 Now you can build/test packages etc, the chroot works like any other x86 chroot on your system as long as you have the qemu-arm-static package installed with the advantage that you can make use of all resources your host system provides (CPU speed, RAM, diskspeed etc) To copy files or Native toolchain to Chroot environment you must exit out of chroot and copy as normal then chroot to "chroot-eabi" directory. 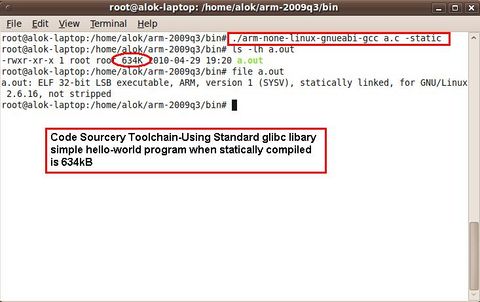 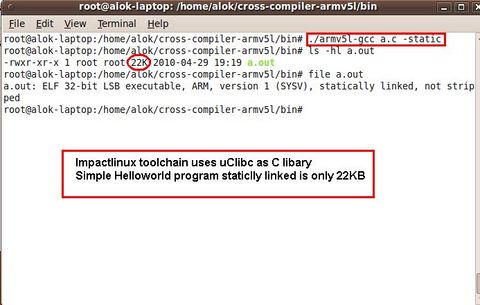 Static linking is to combine an application program with the parts of various library routines it uses.

Main advantage in using this is that you don't care about dependencies ,binary will be able to run on different

Disadvantage is the RAM & Flash is wasted by duplicating the same library code in every static linked process,as statically linked file is significantly of greater size.

to Statically link libraries to Code add -Static to gcc.

Dynamic Linking Dynamic linking involves loading the subroutines of a library into an application program at load time or runtime, rather than linking them in at compile time; the subroutines remain as separate files on disk.Libraries can be called by multiple programs. This saves lots of space ,only drawback being porting of application you need to have depended libraries copied to another system when you are porting your apps.

Normally a program when compiled is dynamically linked ,this can be check using ldd & File commmand