Difference between revisions of "Jetson/Tutorials/Using the SCOL Robot" 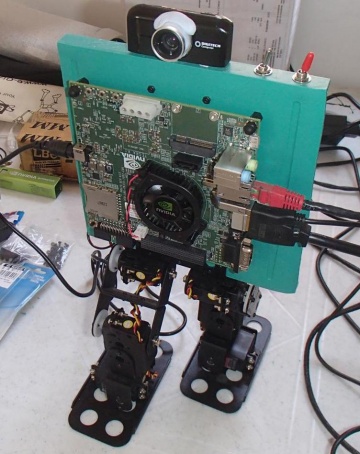 Recharging the batteries on the robot

There are 2 battery packs in the robot: one that says "NiMh" (made from 5 x AA batteries) for the motors, and one that says "LiPo" for the computers. The intelligent battery charger can charge both types of battery packs, but it will only do one type at a time, and you need to change the settings in the charger to switch to a different type.

Disconnect the NiMh battery pack from the robot (using one of the white 2-pin connectors behind the robot) and plug the red & black clips from the charger to the red & black wires of the NiMh battery pack (inside the white connector). Then attach 12V to the battery charger to turn it on (such as using the Jetson TK1 power supply with a 2.5mm to 2.1mm DC barrel adapter) and change the charging mode to NiMh and the current to 0.7A. Then hold down the start button for a few seconds to start the battery charging. It will take around 3 or 4 hours, then beep to say it is finished. Then you can remove the charger clips and connect the battery back to the robot.

Disconnect the LiPo battery pack from the robot (using one of the 4-pin connectors behind the robot) and plug the red & black clips from the charger to the red & black (or maybe yellow & black) wires of the LiPo battery connector. Then attach 12V to the battery charger to turn it on (such as using the Jetson TK1 power supply with the 2.5mm to 2.1mm DC barrel adapter I built) and change the charging mode to LiPo and the current to 0.7A. Then hold down the start button for a few seconds to start the battery charging. It will take around 1 or 2 hours, then beep to say it is finished. Then you can remove the charger clips and connect the battery back to the robot. Now when you turn the robot on (silver switch), the voltage display on the front of the robot should show a high voltage (around 13V) because it is newly charged.