From eLinux.org
Revision as of 22:59, 19 May 2014 by Shervin.emami (talk | contribs) (→‎Tutorials for developing with Jetson TK1: Put the tutorials into a table that can be sorted by difficulty)
(diff) ← Older revision | Latest revision (diff) | Newer revision → (diff)
Jump to: navigation, search

This is NVIDIA's official Jetson TK1 & embedded Tegra Wiki. Most of these pages are an open community Wiki, so in other words, NVIDIA maintains this Wiki regularly but even you can modify this Wiki!

Jetson TK1 is NVIDIA's embedded Linux development platform featuring a Tegra K1 SOC, the first chip to have the same advanced features & architecture as a modern desktop GPU while still using the low power draw of a mobile chip! The Jetson TK1 board therefore allows embedded devices to use the exact same CUDA code that would also run on a desktop GPU (used by over 100,000 developers), with similar levels of GPU-accelerated performance as a desktop!

Jetson TK1 comes with Linux4Tegra (basically Ubuntu 14.04 with pre-configured drivers). There is also some official support for running other distributions using the mainline kernel, discussed further in the Distributions and Mainline kernel sections below.

Besides the quad-core 2.3GHz ARM Cortex-A15 CPU and the revolutionary Tegra K1 GPU, the Jetson TK1 board includes similar features as a Raspberry Pi but also some PC-oriented features such as SATA and mini-PCIe: 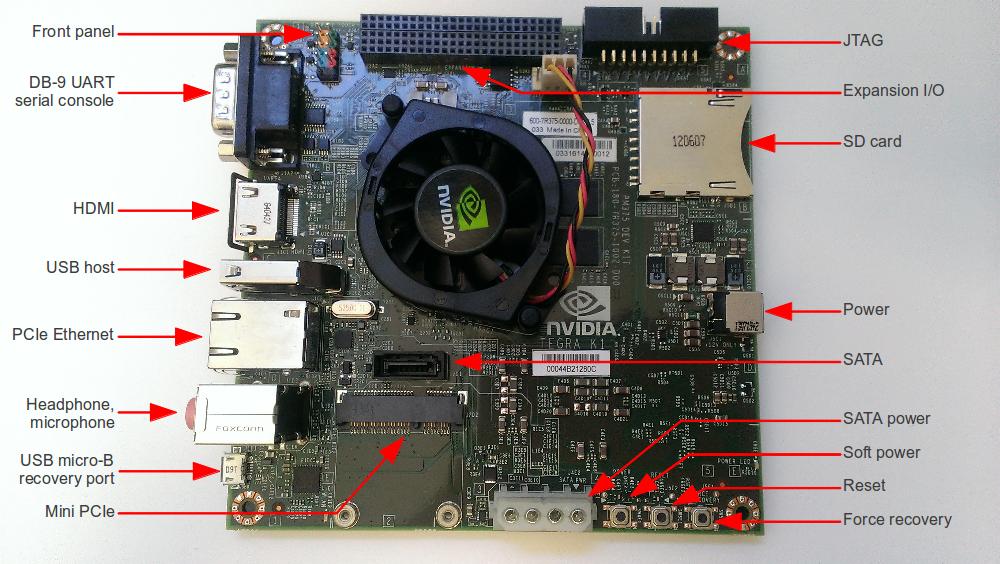 The following signals are available through the 125-pin expansion port:

Where can I get one and for how much?

Whether you want to sew your embedded Tegra into a backpack or put it in a robot or simply use it as an ultra powerful media center, the first thing you should do is attach it to a monitor & keyboard & mouse to make sure it works and get familiar with it for a few minutes. The Jetson TK1 Quick Start Guide (included as a booklet with your Jetson TK1) shows how to do this. Basically, you plug in a HDMI monitor or TV, plug a keyboard into the USB3.0 port, plug a mouse into the included micro-B to female USB adapter and plug that into the micro-B USB2.0 port on the board. Then plug the 12V power supply in, press the small POWER button, then watch it boot up into Linux4Tegra (that is basically Ubuntu 14.04 with some drivers pre-configured).

If you plug in an Ethernet cable into the LAN port (or plug in a USB Wifi dongle), you can already start using it as a mini PC with powerful GPU acceleration!

Tutorials for developing with Jetson TK1

The following are tutorial projects for hardware and/or software development. Since Jetson TK1 is many times faster than other dev boards like Raspberry Pi, BeagleBone Black or MinnowBiard Max, embedded Tegra allows more complex projects than what other dev boards could be used for, so some of these tutorials may be longer. Anyway, just like most of this embedded Tegra wiki, it is maintained regularly by NVIDIA but anyone can create or edit tutorials too, so if you have something useful to share below about Jetson TK1 or Tegra then please do so :-)

The following are descriptions, photos and/or videos of Jetson TK1 projects. Feel free to add your own!

Jetson TK1 comes preloaded with NVIDIA's Linux4Tegra (L4T) distribution. However it is possible to install other distributions on a Tegra device:

NVIDIA's Tegra SoCs are well supported by mainline OSS such as Linux and U-Boot. This section contains an index of topics related to running mainline software on Tegra.

Jetson TK1 was the first embedded board that NVIDIA created for the general public, but there have also been some other Tegra Boards, including the production-grade VCM + Jetson Pro prototyping playform for the automotive industry.

Other SOCs created by NVIDIA

Resources is a list of links to Tegra-related documentation and code outside this wiki, such as TRMs and mainline kernel links.