Document the failure and redesign of a LED Matrix display with an initial size of 70 x 30 RGB APA102 LEDS. intended to create a "roll up display banner" to be driven from the MinnowBoard Turbot. along the way, a number of key design decisions impacted the results as well as some unanticipated complications. 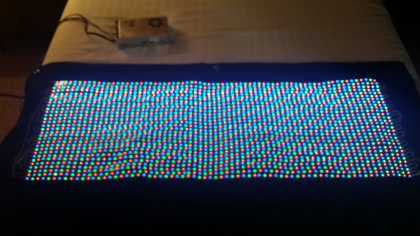 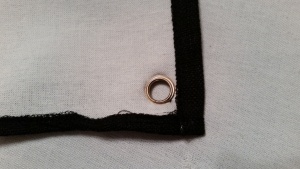 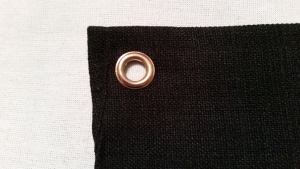 The Dotstar LEDs for the failed version were arranged in a chained sequence. the intention was to cut the strips and align them on the fabric in a "left to right - left to right" sequence similar to traditional LCD panels. this is also sometimes referred to as "Row Major" sequence. this sequence can be illustrated using a 5x5 pixel example: 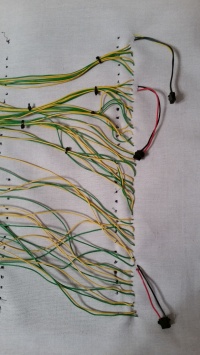 the thought was by designing it this way, and working similar to existing display devices, software support would be easy and require little or no effort to implement. projects such as FBTFT(https://github.com/notro/fbtft/wiki) could be used without modification. while this was true the long wires created both signaling and logistical problems during implementation.

using a fine needle and thread the led strips were sewn to the upholstery. immediately it was discovered that without proper attention, the tension on the thread could easily damage the flex pads. in addition to damaging the pads, it was very difficult to keep consistent spacing between rows while sewing the strips directly to the upholstery. 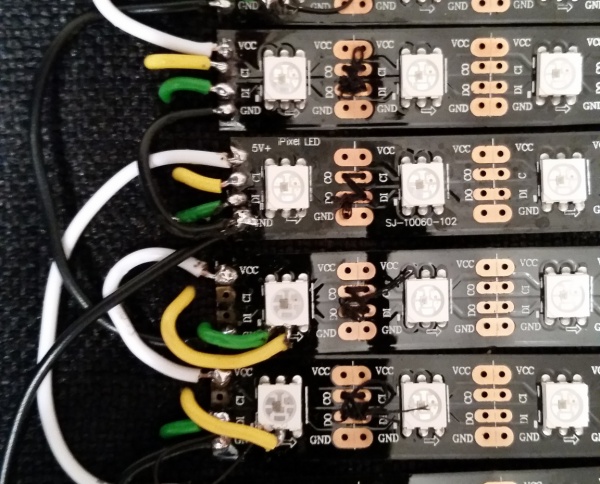 one of the major time consuming items on the project was the power connections. as each LED strip needed both power and ground, making sure that these connections were evenly distributed across the LED strips was challenging. in addition, due to the number of LEDs, two power supplies were needed. Careful consideration had to made to make sure that the two supplies were not connected to each other. in the image below the black wires are ground and the white wires are the +5V. two red wires are visible which are separate +5V connections to the power supplies. 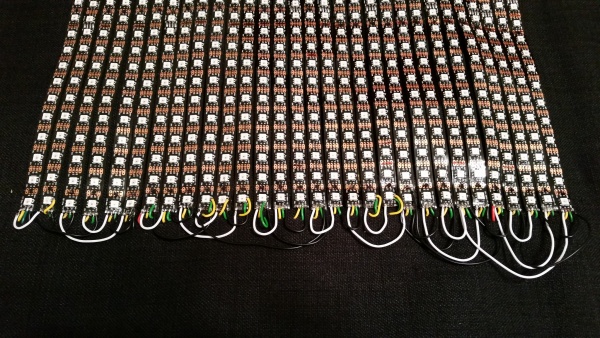 during initial testing with the MinnowBoard Turbot, it was discovered that if the length of the SPI clock and data signals were over 24 inches long between the MinnowBoard Turbot and the first LED on the dotstar string, the signal strength was such that it would not work. however, the signals between one LED string and the next were about 55 inches long and they did work. after closer inspection with an oscilloscope it was clear that the APA102 RGB LEDs were providing a much higher drive strength for the SPI signals. as a quick fix, two of the dotstar LEDs were connected directly to the MinnowBoard Turbot with a longer connection to the first set of LEDs on the matrix coming from the first two LEDs. these initial two leds can either be programmed as off (black) or used as status indicators. for this project i added some code to indicate the status and timing of some of the signals. 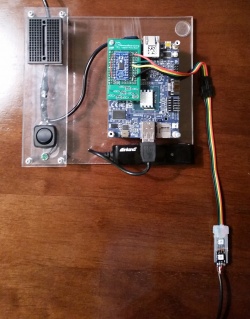 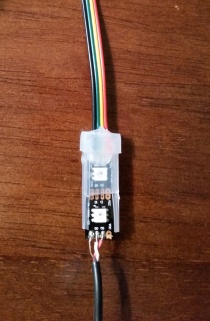 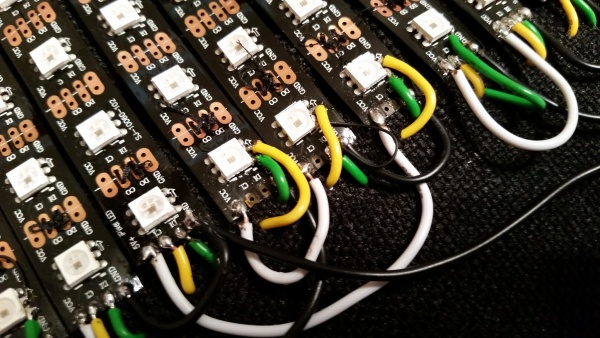 the layout includes two sets of pads for each row. this allows for a solid connection and prevent stress at the flex pads from breaking away. the pcb is designed to support two rows of led strips. this addresses the earlier problem of getting inconsistent spacing between rows. using the pcb on alternating rows, allows for even spacing on each side. in addition a series of holes are added to the pcb to allow the PCB to be easily sewn to the base upholstery fabric without damaging the LED strips. to solve the issue of having to connect ground and power to each row of strips evenly, two solder points are available at the top and bottom edges of the board to provide power and ground. this allows the pcb on top to directly connect to the next pcb below it passing ground and power. this ensures that each strip gets power evenly. 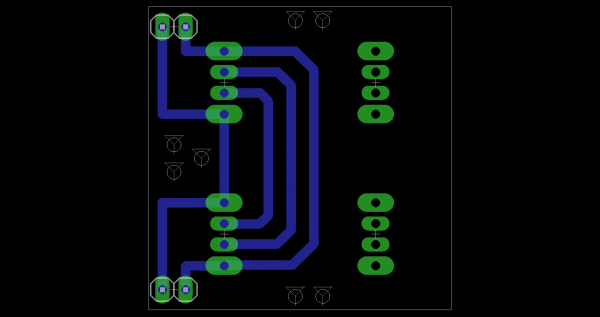 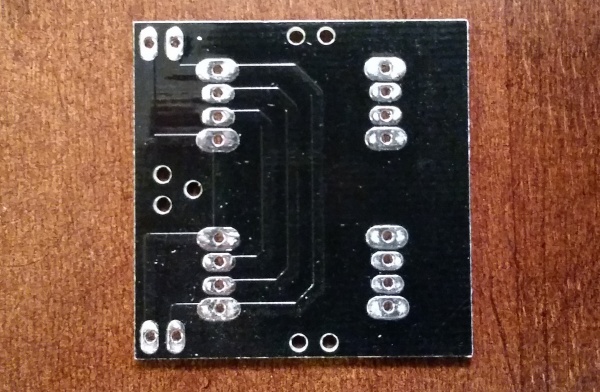 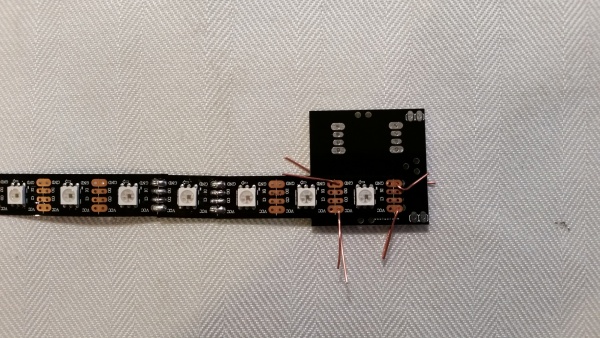 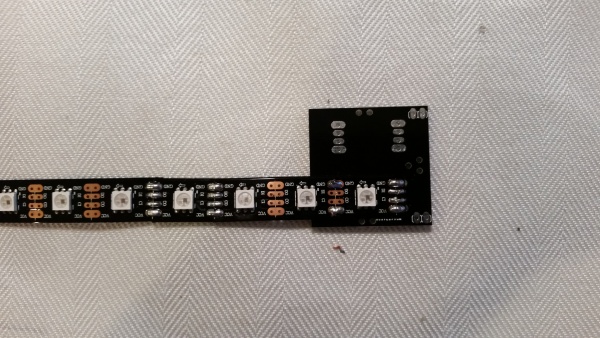 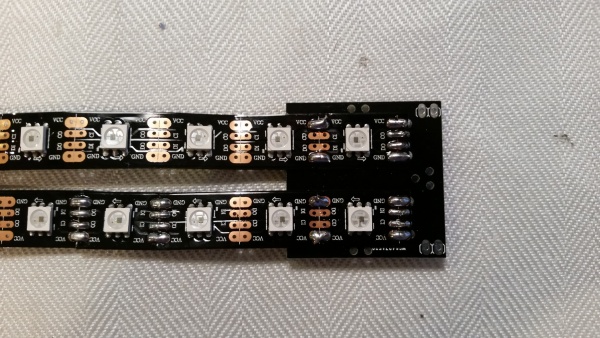