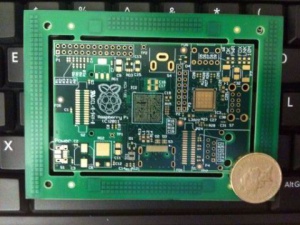 The first product introduced from the Raspberry Pi foundation was the size of a credit card, and was designed to plug into a TV or HDMI monitor. The foundation has kept this form factor over the revisions but have increased the performace while keeping the relavively low price point. The GPIO pins on each board allow the use of optional expansion boards. The current price for the the model A+ is $20, while the model B+ and Raspberry Pi 2 are both $35 each.

There have been six major board revisions of the Raspberry Pi board.

To view the full history on the hardware of the Raspberry Pi check out the Rpi Hardware History. 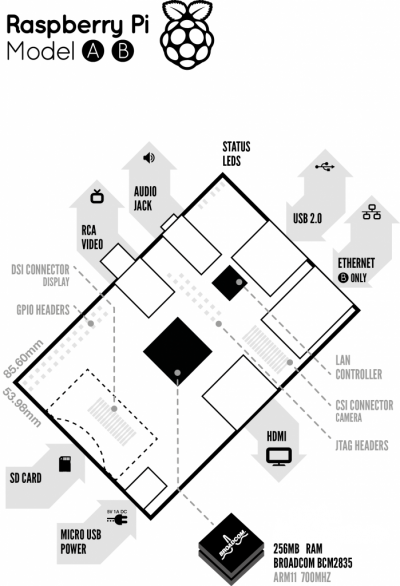 A diagram denoting the places of the different components on the Raspberry Pi, made by Paul Beech, edited to show 256 MB RAM for both boards

The board takes fixed 5 V input, (with the 1.2 V core voltage generated directly from the input using the internal switch-mode supply on the BCM2835 die). This permits adoption of the micro USB form factor, which, in turn, prevents the user from inadvertently plugging in out-of-range power inputs; that would be dangerous, since the 5 V would go straight to HDMI and output USB ports, even though the problem should be mitigated by some protections applied to the input power: The board provides a polarity protection diode, a voltage clamp, and a self-resetting semiconductor fuse.

This means that it's difficult to say exactly how much power is needed. People have reported current requirements of between 300 mA and 550 mA. But it could in reality take more, especially for short periods. A simple multimeter will not show short surges on the power requirement. A surge in the power requirement for a few milliseconds will not be detectable by a meter but will be enough to cause problems. If the board does not get enough power the voltage will drop. If it drops enough parts of the system will run unreliably because data can get corrupted. The USB IC runs on 5 V and handles the USB and Ethernet ports so it's likely that this will be the first thing to fail. Problems seen are unreliable Ethernet connection and unreliable operation of the Keyboard and/or mouse.

Each of the two USB ports on the Pi has a polyfuse rated at 140 mA, so any connected USB devices should draw less than this amount of current. In addition the polyfuse will cause a significant voltage drop, so that USB devices get less voltage than is available on the Raspberry Pi itself, sometimes up to half a volt less (maybe more if the fuse has recently been hot). For regular "low power" USB devices this doesn't cause a problem as they are designed to work with voltages as low as 4.4 volt. This isn't the case however with some USB devices such as Wi-Fi dongles which may need 4.75 volt, and are also known to draw more than 150 mA when configured and active. Because of the problems these polyfuses caused Raspberry Pi's produced after August 25, 2012 have the USB polyfuses F1 & F2 removed (replaced with shorts).

The microUSB input port also has a 1.1 A polyfuse (700 mA "hold current") which may also have enough resistance (although much smaller than the 140 mA fuses) to cause a significant voltage drop on the board, even below its 1.1 A total current.

How can I tell if the power supply is inadequate?

Use a multimeter which is set to the range 20 volts DC (or 20 V =). You should see a voltage between 4.75 and 5.25 volts. Anything outside this range indicates that you have a problem with your power supply or your power cable, or the input polyfuse F3. Anything inside, but close to the limits, of this range may indicate a problem.

Behind the microUSB power connector on the Model B is a metallic grey component called a capacitor, marked as C6. This capacitor helps stabilise the DC power on the board, but for some it has also become a place for their thumb when removing the Raspberry Pi's power lead; unfortunately, this can result in the capacitor breaking off! It has been stated in the forums that the type of capacitor used for C6 will be changed on later Raspberry Pi models for one with sturdier leads. If you do break off your C6 capacitor, it's highly likely that your Raspberry Pi will still work properly, unless you have a particularly unstable power supply, but the general advice is to not use C6 as a leverage point when removing the power connector and also take care when storing or transporting your Raspberry Pi if it's not fitted in a case - try not to stow the board where C6 could be knocked by other items - for example in a laptop carry case or in amongst some books. 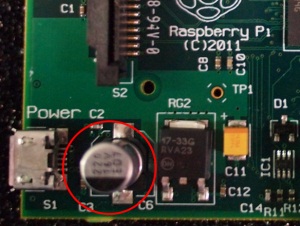 It's unlikely that replacing a broken off C6 capacitor will be covered under warranty, but fortunately they are easy to replace if you have average soldering skills, but remember that reworking your Raspberry Pi will void its warranty too. C6 is a surface mount electrolytic capacitor with a capacitance of 220 microfarad (μF) and a voltage rating of 16 volt (V). The capacitor is polarised and so must be fitted the right way round - notice the black marking on one side in the picture above. A replacement capacitor can be purchased from numerous sources - for example: