The Rpi production board (model B) 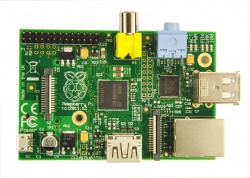 Board #7 was anonymously (and generously) donated to Centre for Computing History[9] (also spotted here..)!

Board #8 Owned by Tech Blogger, Paul Maunders, see his blog for details[10]