In addition to the familiar USB, Ethernet and HDMI ports, the Raspberry Pi offers the ability to connect directly to a variety of electronic devices. These include:

Connections are made using GPIO ("General Purpose Input/Output") pins. Unlike USB, etc., these interfaces are not "plug and play" and require care to avoid miswiring. The Raspberry PI GPIOs use 3.3V logic levels, and can be damaged if connected directly to 5V levels (as found in many older digital systems) without level-conversion circuitry.

Note that no analogue input or output is available. However, add-on boards such as the Rpi Gertboard provide this capability.

Model A and B (Original)

Revision 1 PCBs: Raspberry Pis with a revision 1 PCB (September 2012 or earlier) have a different pin assignment on the P1 connector:

Revision 1 PCBs also do not have the P5 header (see below). See this discussion for more details of the changes between Rev 1 and Rev 2 PCBs.

The P2 header is the VideoCore JTAG and used only during the production of the board. It cannot be used as the ARM JTAG [3]. This connector is unpopulated in Rev 2.0 boards.

The P5 header was added with the release of the Revision 2.0 PCB design. 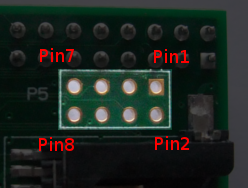 Note that the connector is intended to be mounted on the bottom of the PCB, so that for those who put the connector on the top side, the pin numbers are mirrored. Pin 1 and pin 2 are swapped, pin 3 and 4, etc.

An alternative way to attach this header is on top, at a slant away from the P1 header.

The new header can provide a second I²C channel (SDA + SCL) and handshake lines for the existing UART (TxD and RxD), or it can be used for an I2S (audio codec chip) interface using the PCM signals CLK, FS (Frame Sync), Din and Dout.

Note that the connector is placed JUST off-grid with respect to the P1 connector.

The P6 header was added with the release of the Revision 2.0 PCB design.

A reset button can be attached to the P6 header.[5] Momentarily shorting the two pins of P6 together will cause a soft reset of the CPU (which can also 'wake' the Pi from halt/shutdown state).

The Raspberry Pi Model A+ and B+ boards, and the Pi 2 Model B, have a 40-pin header marked J8, arranged as 2x20 pins. The first 26 pins are the same as P1 on the A/B boards, with the remaining 14 pins providing additional GPIO and ground pins, and an EEPROM ID feature for auto-configuration with add-on "HAT" boards.[6]

GPIO voltage levels are 3.3 V and are not 5 V tolerant. There is no over-voltage protection on the board - the intention is that people interested in serious interfacing will use an external board with buffers, level conversion and analog I/O rather than soldering directly onto the main board.

Each GPIO can interrupt, high/low/rise/fall/change.[9][10] There is currently no support for GPIO interrupts in the official kernel, however a patch exists, requiring compilation of modified source tree.[11] The 'Raspbian "wheezy"' [12] version that is currently recommended for starters already includes GPIO interrupts.

GPIO input hysteresis (Schmitt trigger) can be on or off, output slew rate can be fast or limited, and source and sink current is configurable from 2 mA up to 16 mA. Note that chipset GPIO pins 0-27 are in the same block and these properties are set per block, not per pin. See GPIO Datasheet Addendum - GPIO Pads Control. Particular attention should be applied to the note regarding SSO (Simultaneous Switching Outputs): to avoid interference, driving currents should be kept as low as possible.

There is also some information on the Tutorial on Easy GPIO Hardware & Software.

Kernel boot messages go to the UART at 115200 bit/s - there are more details on the serial port page.

Referring to pins on the Expansion header

The header is referred to as "The GPIO Connector (P1)". To avoid nomenclature confusion between Broadcom signal names on the SoC and pin names on the expansion header, the following naming is highly recommended:

The maximum permitted current draw from the 3.3 V pins is 50 mA.

Be very careful with the 5 V pins P1-02 and P1-04, because if you short 5 V to any other P1 pin you may permanently damage your RasPi. Before probing P1, it is a good idea to strip short pieces of insulation off a wire and push them over the 5 V pins are not accidentally shorted with a probe.

The complete list of chipset GPIO pins which are available on the GPIO connector is:

If 17 GPIOs are not sufficient for a project, there are a few other signals potentially available, with varying levels of software and hardware (soldering iron) hackery skills:

GPIO02, 03, 05 and 27 are available on S5 (the CSI interface) when a camera peripheral is not connected to that socket, and are configured by default to provide the functions SDA1, SCL1, CAM_CLK and CAM_GPIO respectively. SDA1 and SCL1 have 1K6 pull-up resistors to 3.3 V.

GPIO06 is LAN_RUN and is available on pad 12 of the footprint for IC3 on the Model A. On Model B, it is in use for the Ethernet function.

There are a few other chipset GPIO pins accessible on the PCB but are in use:

The GPIO ports include the ability to enable and disable internal pull-up or pull-down resistors (see below for code examples/support of this):

The Foundation will not include a GPIO driver in the initial release, standard Linux GPIO drivers should work with minimal modification.[19]

The community implemented SPI and I²C drivers [20], which will be integrated with the new Linux pinctrl concept in a later version of the kernel. (On Oct. 14 2012, it was already included in the latest raspbian image.) A first compiled version as Linux modules is available to install on the 19/04/2012 Debian image, including 1-wire support[21]. The I²C and SPI driver uses the hardware modules of the microcontroller and interrupts for low CPU usage, the 1-wire support uses bitbanging on the GPIO ports, which results in higher CPU usage.

A useful tutorial on setting up I²C driver support can be found at Robot Electronics - look for the downloadable document rpi_i2c_setup.doc

There are two SPI bus brought out to the header: RPi_SPI

There are two I²C-buses on the Raspberry Pi: One on P1, and one on P5.

Note that there's a bug concerning I²C-clock-stretching, so don't use I²C-devices which use clock-stretching directly with the Raspberry Pi, or use a workaround. Details about this bug can be found at:

On the production board[23], the Raspberry Pi Foundation design brings out the MIPI CSI-2 (Camera Serial Interface[24]) to a 15-way flat flex connector S5, between the Ethernet and HDMI connectors. A compatible camera[25] with 5 Megapixels and 1080p video resolution was released in May 2013.

On the production board, the Raspberry Pi Foundation design brings out the DSI (Display Serial Interface[26]) to a 15-way flat flex connector labelled S2, next to Raspberry Pi logo. It has two data lanes and a clock lane, to drive a possible future LCD screen device. Some smart phone screens use DSI[27].

HDMI-CEC (Consumer Electronics Control for HDMI) is supported by hardware but some driver work will be needed and currently isn't exposed into Linux userland. Eben notes that he has seen CEC demos on the Broadcom SoC they are using.

libCEC with Raspberry Pi support has been included in OpenELEC and will be included in Raspbmc RC4.[28]

For more information about HDMI-CEC and what you could do with it on the Raspberry Pi please see the CEC (Consumer Electronics Control) over HDMI article.