The Raspberry Pi Foundation is a UK registered charity (Registration Number 1129409) which exists to promote the study of computer science and related topics, especially at school level, and to put the fun back into learning computing. We expect this computer to have many other applications both in the developed and the developing world.

Raspberry Pi Staff will be attending the following events:

The following are general-interest industry events and are not an indication that Raspberry Pi will be attending, exhibiting or speaking at the event. For Raspberry Pi event and speaker schedule, please contact press@raspberrypi.org. 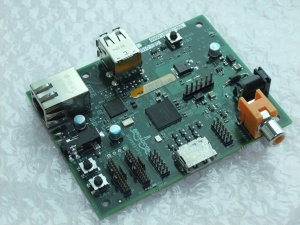 The first product is about the size of a credit card, and is designed to plug into a TV or be combined with a touch screen for a low cost tablet. The expected price is $25 for a fully-configured system.

Estimated availability (as of 25th October 2011) is December 2011. Initially, there will be shipping from the UK and possibly the US, but will probably expand with local distributors by the second quarter of 2012.

You just got your new Raspberry Pi device, and now? See beginners guides.

A protective case is an often-cited required accessory. Cases are likely to be offered both directly from Raspberry Pi and from 3rd party companies such as Special Computing.

The board takes fixed 5V input, (with the 1V2 core voltage generated directly from the input using the internal switch-mode supply on the BCM2835 die). This permits to adopt the micro USB form factor, which, in turn, grants the user from inadvertently plugging out-of-range power inputs; that would be dangerous, since the 5V go straight to hdmi and output usb ports, even though the problem should be mitigated by some protections applied to the input power: the board provides a polarity protection diode, a voltage clamp, and a self-resetting semiconductor fuse.

It is likely that expansion boards will be offered both by Raspberry Pi Foundation and by 3rd parties.

The Broadcom BCM2835 only provides HDMI output and composite output. It does not provide RGB or the other signals needed to by RGB, S-VIDEO or VGA connectors so additional componenty would be needed to generate these signals. Additional componentry would push the price beyond the $25 target and therefore won't happen.

A couple of options for VGA or component RGB outputs, bridging from either HDMI or the MIPI DSI interface:

The first product is about the size of a credit card, and is designed to plug into a TV or be combined with a touch screen accessory for a low cost tablet. The product will be available in two configurations: Model A and Model B. The expected price is $25 for a fully-configured Model-A system and around $35 for a Model B.

For the first release (~December 2011), there will mostly likely be very minimal documentation.

Preliminary Alpha board power usage measurements. This is with graphics output on the HDMI port, no power from USB plugs.

These would allow any kind of TV to be used. Computer monitors using DVI-D would also be supported with a simple HDMI-DVI cable.

VGA monitors would require either a composite or HDMI to VGA scan converter box. The SOC does not support any kind of analog component video, including VGA, since the SOC is designed for mobile phone use where this would not be a requirements.

The boards have both Composite and HDMI outputs so should interface with a range of DLP and laser based Pico projectors on the market.

There are approximately 16 spare GPIOs, which on the Alpha board are brought out to 1.27mm pin-strip. Voltage levels are 3v3. The connector choice is deliberately annoying to connect to directly; there is no over-voltage protection on the board so the intention is that people interested in serious interfacing will use an external board with buffers, level conversion and analog I/O rather than soldering directly onto the main board.

We also bring 2x I2C (3v3), I2S and an SPI (3v3) interface out to the same connector. We support one slave interface for I2C and one for SPI.

Kernel boot messages go to this UART at 115200bps.

On the Alpha board, we also bring out MIPI CSI-2 & DSI interfaces to a 1.27 mm pinstrip.

HDMI-CEC is supported by hardware but some driver work will be needed and currently isn't exposed into Linux userland.

Eben notes that he has seen CEC demos on the Broadcom SoC they are using.

The boards do not include NAND or NOR storage - everything is on the SD card, which has a FAT32 partition with GPU firmware and a kernel image, and an EXT2 partition with the rootfs.

We're not currently using a bootloader - we actually boot via the GPU, which contains a proprietary RISC core (wacky architecture ;) . The GPU mounts the SD card, loads GPU firmware and brings up display/video/3d, loads a kernel image, resets the SD card host and starts the ARM.

You could replace the kernel image with a bootloader image, and that would work fine.

Code and binaries for Raspberry Pi will be available at various places from launch, including pre-built Linux distributions.

The Broadcom processor on Raspberry Pi contains an ARM v6 general purpose processor and a Broadcom VideoCore IV GPU. No data is currently available on other cores (if any) available in the BCM2835.

The GPU is capable of 1Gpixel/s, 1.5Gtexel/s or 24 GFLOPs of general purpose compute and features a bunch of texture filtering and DMA infrastructure - the Raspberry Pi team are looking at how they can make this available to application programmers.

There is a DSP, but there isn't currently a public API (Liz thinks the BC team are keen to make one available at some point).

Ubuntu is currently listed as the default distribution on the Raspberry Pi website, but the Ubuntu developers have now stated they will not be supporting the ARMv6 architecture, so Ubuntu is likely to be dropped.

Eben says (regarding default distribution): "Either Ubuntu or Fedora; the main point in Fedora’s favour is their ongoing support for ARMv6 architectures."

From Eben: "We'll have to take a look. We support hardware-accelerated OpenVG, and have had Flash Lite running incredibly fast. Personally, I'd like to get the official hardware-accelerated Flash 10 going on there, running against OpenGL ES 2.0, but that's something to think about after the launch."

The GPU is a Broadcom VideoCore IV.

Raspberry Pi plans to support Python and C as primary teaching languages, but expect to have some sort of BASIC on there too. Perhaps even BBC BASIC or SuperBASIC depending on copyright issues.

Languages tested on Alpha board

Products are RoHS and CE compliant. Please contact Raspberry Pi for details regarding WEEE in your country.

To have an idea of shipping cost why don't you look at the Royal Mail website: http://sg.royalmail.com/portal/rm/PriceFinder?catId=23500532&gear=pricingcalc&campaignid=pricefinder_redirect