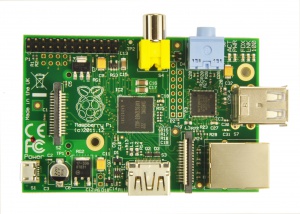 A 3D rendering of the Raspberry Pi logo by forum user Antario. Source