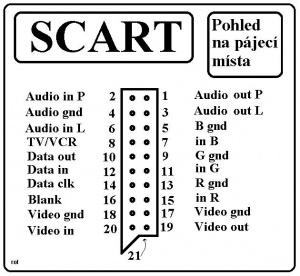 SCART (from the French Syndicat des Constructeurs d'Appareils Radiorécepteurs et Téléviseurs - (Radio and Television Receiver Manufacturers' Association) - is a French-originated standard and associated 21-pin connector for connecting audio-visual (AV) equipment together. It is also known as Péritel (especially in France), 21-pin EuroSCART, Euroconector or EuroAV. In America, another name for SCART is EIA Multiport (an EIA interface).

In Europe, SCART is the most common method of connecting audio-visual equipment together, and has become a standard connector for such devices; it is far less common elsewhere in the world. Designed to carry analog standard-definition content, SCART is becoming obsolete with the introduction of new digital standards such as HDMI, which can carry High-definition video content and Surround sound.

The official standard for SCART is CENELEC document number EN 50049-1. SCART is sometimes referred to as the IEC 933-1 standard.

The SCART system was intended to simplify connecting audio-video equipment (including TVs, VCRs, DVD players and video game console). To achieve this it gathered all of the analogue signal connections into a single cable with a unique connector that made incorrect connections nearly impossible.

The signals carried by SCART include both composite and RGB (with composite synchronisation) video, stereo audio input/output and digital signalling. The standard was extended at the end of the 1980s to support the new S-Video signals. In addition, a TV can be awakened from standby mode or switched to video mode through a SCART connector.