There are four broad types of activities that the test lab is intended to support:

On the Open Test Lab page, these are described as:

server
: A single machine in the lab is used as the main server for lab operations. This machine

processes board reservations, coordinates nightly regression tests, is a repository for lab test software, and provides information and results for the lab to the public.

host
: The machine used to control or access one or more target boards.

node
: The collection of machines consisting of a single host and one or more targets.

client
: A machine that accesses the lab for testing services.

target
: A development board which can be accessed by the lab software.

compiled on the host machine, and transferred to the target machine for execution. This includes the kernel, and user-space libraries, daemons, utilities and other programs.

toolchain
: The collection of programs used to create software for a target machine. This consists of the compiler (including preprocessor), assembler, linker and other programs used for manipulating source and machine code into a form usable on the target. This usually consists of software from the Linux packages for gcc, binutils, and glibc. The toolchains are run on the host machine of a node.

A host and target combination (a node) can be located anywhere in the world - either physically in the main lab, in a satellite lab, or at some point on the Internet. Operationaly, it is useful to distinguish between those that are made available for public use (and are managed by CELF or an affiliated entity), and those that are used used privately. The following terminology is used for these different nodes:

private node
: An host/target combination NOT managed by CELF.

Here is a diagram of the architecture of the CELF Open Test Lab. 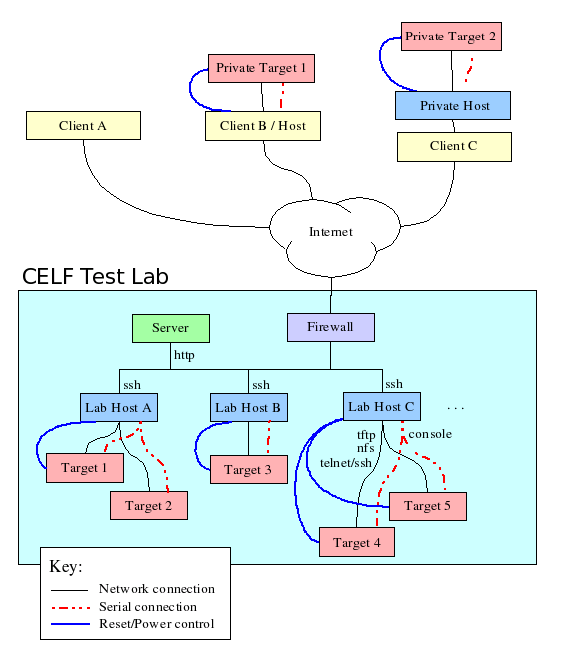 More details about the server for the lab are at Test Lab Server Spec.

One important attribute of the server that is reflected strongly in the architecture is that the server plays a very passive role in the lab. As can be seen below, the host machines have the major role in initiating test activities as part of automated testing.

Interactive use of a board remotely

A developer wants to use an individual board for interactive testing. In this mode, the developer follows certain high-level steps to work with the board:

In the lab diagram, an example of this would be client A accessing Target 1, through Lab host A. The reservation would be sent to the server. The host would grant the reservation after checking with the server.

In this scenario, a developer uses the lab to perform the same test on multiple boards. This could be a small subset of boards, or conceivably all the boards registered with the lab.

In the lab diagram, an example of this would be client A requesting a test to be run on Target 1 through Lab host A and target 3 through lab host B.

In this case, a lab administrator (CELF) sets up a test to be run on a periodic basis (e.g. nightly), on a certain set of boards.

This mode of usage allows an individual to use all the tests on the server, in an interactive or automated fashion, on their own machines.

An example of this would be Client B downloading tests from the lab server, and running them locally (as a host) to run a test on private target 1.

There are multiple elements in the lab system, with interfaces between each one.

This section describes the interfaces between different elements, in terms of protocols, formats and conventions. The model of interaction (push vs. pull, synchronous vs. asynchronous, interactive vs. automated) is also described.

/\ Note - This section is still under construction

Interface between client and server

A client access the server via http. The server runs a web server, with a wiki to provide data about each board in the system.

Jobs for each host to run are located on the server. A reservation for interactive use of a board is a special type of job. Many jobs will not have a specific time slot.

When a job is submitted, the server creates a page for each lab node for which the job is requested. The server rejects job requests or reservations which conflict with those already scheduled for a node. (This can only happen with job requests with a specific time or duration.)

Interface between host and server

A server does not directly initiate work on a host. Rather, the host initiates contact with the server, to obtain reservation requests. At regular intervals, the host downloads the list of its jobs and determines which one it will "execute". At the end of a job, the host uploads the results and completion information to the server.

The host also uploads its target information and status periodically to the server.

During a reservation, the host does nothing automated. That is, is doesn't run a script from the server, but it might record secure-shell access during the reservation time slot, and report the activity log as the result of the "job". This could be used to detect wasted time slots (if no one logs in).

Interface between host and target

Note that there is no specified interface between a client and a target, or between a server and a target. Targets are only accessible via a host machine.

The host machine is the initiator of all activity in the system. The target machine is a slave to the host.

Interface between host and Internet

A host may be required to download software directly from the Internet as part of building the software for a target. A host needs http access to the Internet.

Interface between client and host

The only direct interface between a client and a host is interactive command line access, via ssh.

At the time of an ssh login, the host machine may validate the client's reservation by contacting the server. (Or, it may "know" that this client is allowed to access the machine, by having recently checked with the server). The host may update the status of the job with the list of the current user for the target.

Desired operations on the host machine

This section describes in simple sentences, the requirements on the host machine for this architecture. After each statement, in parenthesis, is a possible command that could be used to implement the required operation.