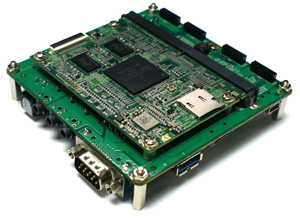 The Wandboard is a low cost development board based on the Freescale i.MX6 multicore ARM Cortex-A9 family of processors. In consists of a core module based on the EDM standard and a simple to extend baseboard.

There are currently two versions of Wandboard, "Solo" and "Dual". The Wandboard itself is a System-On-Module of the EDM standard that comes with a matching motherboard. The motherboard is quite trivial and is the same for both versions of the Wandboard.

For power, you will need a 5V 2A DC power supply with a positive center pin. the barrel connector should be 5.5 mm. Current to boot-up is about 800mA. In free air, running a GPU demo, the processor gets to about 20 celcius above ambient.

The Wandboard has a working SATA port fitted. You need an additional power supply for the SATA drive, there is no on-board power connector for the drive.

See Getting started with Yocto on Wandboard.

GPU/VPU support in ubuntu/linaro is patchy. 12.04 is OK, anything later is work in progress...

HDMI resolution detection depends on the identification information returned from the monitor, but can be overridden using the uEnv.txt boot file, or with a serial port at boot time.

As of Jan 17, 2013 preorder only. Prices are 69 USD for Solo and 89 USD for Dual. First boards seem to be shipped to partner developers.